U. gets $740K grant for cannabis research

SALT LAKE CITY — Researchers at the University of Utah will soon study the effects of cannabinoids — products of the marijuana plant — on people.

Medical marijuana is permitted in 29 states, and while it is not legal in Utah, select patients are permitted to use cannabis oil for certain conditions. Some of them are reporting relief, but it is not yet known why or how those results are achieved and why they are not achieved by everyone who tries it.

"It's surprising how much is unknown about basic neuroscience and how cannabis affects the brain," said Dr. Jeffrey Anderson, U. associate professor of radiology and the study's co-principal investigator. "We hope to make it simple. We want to understand what exactly it is doing and, for medical applications, we would like to understand how it works, not just if it works."

The multidisciplinary team of researchers at the U. will use state-of-the-art, high-end brain imaging tools to examine brain networks and responses to cannabinoids.

"It is imperative to work as quickly as we can to understand what is happening," Anderson said. "I see this as a long-term effort to understand the medical uses and the mechanisms of action of cannabis derivatives."

Utah lawmakers have conservatively approached the issue of medical marijuana, stating more research is needed before government policy or laws surrounding legal use of it in the state is created.

They have tasked the Utah Science Technology and Research Initiative, an economic development engine created in 2006, to study marijuana's medical properties pertaining to pain, with a $500,000 appropriation earlier this year.

The initiative will conduct randomized placebo controlled clinical trials with 45 Utahns experiencing chronic pain to determine the effects of tetrahydrocannabinol, the psychoactive ingredient in cannabis often called THC, and cannabidiol or CBD, which is not considered to have any psychoactive or mind-altering effects.

The U. scientists will use molecular and advanced functional imaging to compare the brain effects of placebo, THC and cannabidiol as it relates to attention, memory, processing of novelty and change, as well as responses to stress and pain in a group of 40 healthy young adult subjects. 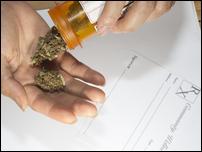 "We still do not understand many fundamental cannabinoids mechanisms, such as which receptors in the brain they work through and how they cause changes in brain networks underlying attention, anxiety, pain and mood," said Jon-Kar Zubieta, principal investigator and chairman of the department of psychiatry at the U.'s School of Medicine. "Deciphering the personalized effects of CBD and THC will have a profound impact on how various cannabinoids may best be used for medical treatments."

It will be the first scientific research foray into this type of analysis, specifically, into the individualized effects of medicinal marijuana on certain receptors in the brain.

A $740,000 grant from the local Ray and Tye Noorda Foundation in partnership with California-based Wholistic Research and Education Foundation, recently awarded, will make it possible. After completing the strenuous federal government application process to study the Schedule I substances, the U. researchers intend to conduct their study over two years.

Once they have preliminary data, Anderson said they could possibly look at the effects of cannabis on anxiety, autism, post-traumatic stress disorder and other health issues "to understand under what circumstances it would be useful."

Medical proponents of research — deemed a safer, but slower route to legalization — have expressed support for lawmakers and further understanding of the substance before permitting widespread use. Opponents, including patients who could potentially benefit from the use of medical marijuana, have organized a campaign to put it on the ballot, allowing Utahns to vote on the matter.

The Utah Patients Coalition has said it, too, believes in furthering research, but that a pathway to legality for patients should also be established.

The organizations funding the research are looking forward to being involved in the "groundbreaking research that has the potential to dramatically shape the developing field of cannabinoid therapy," said Andy Noorda, chairman and co-founder of the Wholistic Research and Education Foundation and trustee of the Utah County-based Ray and Tye Noorda Foundation.

"There is increasing data that the endocannabinoid system plays an integral role in our overall physical and psychological wellness," he said.

U. labs are equipped to deliver on the project, Anderson said, adding that access to collaborators from across a variety of disciplines will also be helpful.

"It's a great team poised to make a real contribution," he said. "We couldn't be more eager to get started."