What does Alabama senate upset mean for future elections in the US?

5PM: What does Alabama senate upset mean for future elections in the US?
KSL TV

In a surprise, Doug Jones won the election, becoming the first Democrat to secure a Senate victory since Howell Heflin was re-elected in 1990 — though Heflin’s political views were much different than Jones’ platform.

“It’s always shocking for a result like that, where a Democrat wins in a deep red Republican state — or potentially vice versa where you have a Republican win in a dark blue state,” said James Curry, assistant professor of political science at the University of Utah. “The immediate takeaway is, 'that’s a dramatic outcome.'”

It's not unusual to see political parties vote in stronger numbers after losing a major election, Curry said, hinting at the Democrats losing the presidential election in 2016. The 2016 win gave the Republican Party the majority in the Oval Office and in the House of Representatives and Senate.

However, that likely wouldn’t be enough to sway a deep Republican state to vote for a Democrat without unique circumstances. If anything, different Utah political pundits said Tuesday's election could have pointed toward the strength of the “#MeToo” movement regarding sexual assault and misconduct and the corresponding fallout in the entertainment and media industries, and politics, as well. 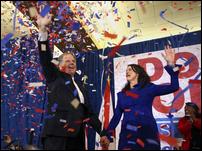 “I do think there is starting to be a decoupling of the relationship of a political party to good solid principles and good public policy because we can’t accept any more of what the political parties did during all of this stuff,” said Boyd Matheson, president of the Utah-based Sutherland Institute on KSL Newsradio’s “The Doug Wright Show,” citing recent politicians from both major political parties ousted over sexual misconduct allegations.

He said the election may be a sign voters would choose values over political parties even if it jeopardizes the party.

“People are starting to disconnect that, and I think that’s so good for the country,” he added. “I think it would be good for our dialogue moving forward.”

Jason Perry, director of the Hinckley Institute of Politics, agreed.

"I think that people all across the country are appropriately talking about sexual misconduct. It can't be allowed," he said. "I think for the voters of Alabama, they showed, for this particular individual, that they do care about what people do and care more about that than the party itself."

In this case, Moore was accused of sexual misconduct by multiple women who claimed he courted them 40 years ago while the women were teenagers. The Washington Post broke the story in a Nov. 9 article.

“If Roy Moore hadn’t been accused of pursuing 14-, 15-, 16-year-old girls, he probably would have won the election,” Curry said Wednesday. "I thought that the allegations were particularly troubling, and the fact that it fits into this national mood, this national movement and this national narrative did him in."

"I think for the voters of Alabama, they showed, for this particular individual, that they do care about what people do and care more about that than the party itself." — Jason Perry, director of the Hinckley Institute of Politics

Kirk Jowers, former director of the University of Utah's Hinckley Institute of Politics, said Moore wasn’t a strong candidate to begin with, noting that President Donald Trump initially backed Luther Strange in the Republican primary for the special election.

“Roy Moore was just — you could barely think of a worse candidate on Earth than Roy Moore to put up, and that was even before the child molestation allegations," Jowers said.

Jowers also noted it was the third recent candidate Donald Trump has backed who ended up losing, including pulling for Luther Strange over Moore in the Republican Primary. The other candidate was Ed Gillespie, who lost the Virginia gubernatorial race in November.

However, pundits seemed to agree Tuesday's result probably won't alter voting trends in traditionally red states, such as Utah, in 2018, unless there are unique circumstances.

"The quality of candidate does matter," Perry added. "There are voters out there that think about (the) party, but in the end, they're thinking about the person."