"I've always wanted to help them, but I didn't know how," Emma said. "Then one day my parents told me about what the Miller family did."

Four months ago, the Millers pledge to match dollar-for-dollar every donation up to $10 million to fund the centers meant to replace the troubled downtwon Road Home shelter, slated to close in June 2019.

So Emma said she decided to donate $5 — one whole week of allowance — to the cause.

"Those people needed it more than I did," she said.

In the months since the Miller's $10 million match announcement, donations from organizations and community members have totaled nearly $1.2 million, doubled to $2.4 million by the Miller's match.

Maureen Shumway — a resident of North Salt Lake and wife of Randy Shumway, founder of Utah-based Cicero Group — also attended Thursday's news conference to talk about a $100,000 donation from her family.

"I'll confess to feeling a little uncomfortable," Shumway said, explaining "our donation is so comparatively small" compared to the Millers. "When we heard about the Miller family donation, we sat as a family and agreed to do more — that we needed and wanted to help our brothers and sisters who are encountering challenges."

Harris Simmons, president of Shelter the Homeless, applauded the donations, but he urged Utahns to not stop there.

"It's great progress but we still have a long way to go to make these homeless resource centers a reality," he said. 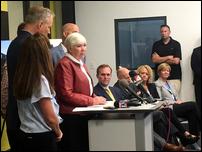 Utah Jazz owner Gail Miller and her family on Wednesday vowed to match up to $10 million in donations for the three new homeless shelters in Salt Lake County slated to open in June 2019 — but not for the brick and mortar.

The total one-time cost of the three homeless centers — two in Salt Lake City and one in South Salt Lake — is projected at $52 million, including $40 million for construction, according to Janell Fluckiger, executive director of Shelter the Homeless.

But that doesn't include costs for other efforts, including increasing the housing stock and ongoing operating costs for services and programs.

In donations separate from the Millers' pledge, about $20 million in state funds have been set aside for the homeless centers, as well as $4 million from businessman Pat King for the women's shelter, and $10 million from the LDS Church for transitional housing.

Simmons acknowledged there's a long way to go to fully match the Miller's $10 million challenge, but he said he's confident "we'll get there."

"This is a caring community," he said.

Miller applauded the donations from Emma, Salt Lake County, the Shumways and others, urging other Utahns to also contribute.

"It is a great, noble cause and I know more will step forward," she said. "Please join me in giving and being a compassionate member of this society where we can make a difference for the homeless population."