BOISE, Idaho (AP) — Predator-killing cyanide traps such as one that sickened a boy in Idaho and killed his dog should be banned, environmental groups told the federal government Thursday.

The Center for Biological Diversity and other conservation groups petitioned the Environmental Protection Agency to outlaw the spring-activated devices called M-44s.

The traps look like water sprinkler heads embedded in the ground and spray cyanide when triggered by animals attracted by bait.

The groups said the federal agency should ban the traps that pose a threat to people and pets on public lands and kill non-targeted wildlife.

"This is a good time for the agency to take a serious look because people are really outraged about this," said Collette Adkins, an attorney and biologist at the center.

In March, one of the devices injured a 14-year-old boy and killed his dog when they encountered it on federally owned land about 500 yards (457 meters) from his home.

The scrutiny intensified after The Associated Press reported the device was on public land despite a decision months earlier by federal officials to halt use of the traps on all U.S.-owned land in Idaho.

Officials say the devices killed about 12,500 coyotes in 2016, mostly in Western states.

The Agriculture Department said a 2015 survey of producers determined that coyotes nationwide killed about 120,000 sheep and lambs valued at up to $20 million.

The cyanide devices are also used to protect cattle.

Environmental groups say the devices from 2010 to 2016 killed about 200 domestic and feral dogs and injured a handful of people, including the boy in Idaho.

In April, federal officials in Idaho placed a temporary ban on the predator traps. Two months later, U.S. officials launched an expanded review of the traps and additional guidelines for workers deploying the devices. 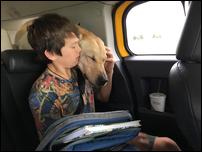 Predator-killing cyanide traps such as one that sickened a boy in Idaho and killed his dog should be banned, environmental groups told the federal government Thursday.

Adkins said a denial of the petition would be a basis for a lawsuit.

"The federal government has a paramount duty to protect people and wildlife from deadly poisons that unnecessarily endanger the public, wildlife and companion animals," Kelly Nokes, carnivore advocate at WildEarth Guardians, said in a statement.

The petition is part of a larger effort by environmental groups to ban the devices.

Earlier this year, environmental and animal-welfare groups filed a lawsuit claiming the U.S. government is violating the Endangered Species Act by allowing the predator-killing poison in areas where it could harm federally protected species including grizzly bears and Canada lynx.

That lawsuit by the Center for Biological Diversity and others seeks an immediate ban on cyanide on predator traps and another pesticide called Compound 1080 that's placed in collars worn by livestock and ingested by attacking predators.

In recent weeks, federal officials in Idaho held a series of public meetings demonstrating how the traps work and explaining the need to protect livestock.