Now that the nascent United Utah Party has a candidate for Congress on the November special election ballot, its emboldened leaders are making noise about taking down the GOP.

"What we saw yesterday was the beginning of the end of the one-party state in Utah. We know that and they know that as well," United Utah Party Chairman Richard Davis said Thursday.

A federal judge Wednesday ordered the state to include the new party's nominee, Jim Bennett, in the election to replace former Republican Rep. Jason Chaffetz in the 3rd Congressional District. The party sued Lt. Gov. Spencer Cox after the state elections office rejected Bennett's attempt to file as a candidate under the United Utah banner because it had yet to certify its status.

"I think one of the reasons why you’ve seen the Republicans fight back so hard against our participation is they recognize we’re a real threat, that we’re here to compete and we’re here to win," Bennett said.

"Well, they've got 64 registered voters in the United Utah Party as of the end of the last calendar month, so 64 versus 715,000 registered Republicans, active and inactive," he said. "I don't view them as a threat. But I think if we don't appeal to people, they can become a viable party if we drive (voters) away."

Neither Bennett nor Davis knew how many registered members their party has when asked at a news conference announcing their court victory Thursday. Bennett guessed "very few" and attributed that to voters wanting to participate in the 3rd District GOP primary, which is open only to registered Republicans.

The numbers Anderson cited for the United Utah Party and the Utah GOP were correct as of July 31, according to the state elections office website.

Republicans hold every statewide elected office and congressional seat in Utah and own supermajorities in the state House and Senate. Democrats have been unable to mount much of a challenge in any those offices. 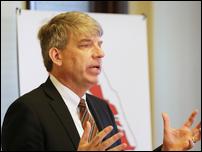 In his ruling, U.S. District Judge David Nuffer noted GOP dominance in the state, saying all the decisions about how to handle the election to replace Chaffetz were made by Republicans. Failure to include the United Utah Party would deny voters an important choice, he said.

Bennett, the son of the late GOP Sen. Bob Bennett, and Davis, a BYU professor and former Utah County Democratic Party chairman, founded the new party this spring to attract disaffected Republicans and Democrats as well as independents.

Davis acknowledged the party "doesn't have very much money" at this point. Bennett said he has $2,500 in his campaign account. Being in limbo has hampered fundraising, but both say they expect to bring in more dollars and new members now that ballot issue is settled.

Bennett said he anticipates having to raise hundreds of thousands of dollars to compete in the 3rd District race, adding he's already received a lot of free publicity because of the battle to get on the ballot.

"I think to some degree the state has done us a tremendous favor by showing how scared they are of the United Utah Party in doing everything they can to keep me off the ballot," he said. "The fact that I have demonstrated that I can fight the one-party state and win demonstrates that I'm a lot more credible than your average third-party candidate."

Anderson said a new party needs deep pockets and a national affiliation to be succeed. Grass-roots fundraising isn't going to be enough, he said, adding the tea party had a lot more support and national popularity before fizzling out.

"I don't view it as a us-versus-them," he said, adding the GOP's platform aims to promote candidates and attract voters who identify with conservatism.

"I think we're the party that wields the most influence there. Absent some really grotesque things that the party will not do under my leadership, we're getting more people involved actually, and we're welcoming the unaffiliated voters to the general election," Anderson said.

But Bennett said President Donald Trump is turning off a lot of Republicans, citing his low approval ratings. He said people are looking for alternatives and "I am that alternative."

Bennett listed his tops issues as health care reform, public lands and immigration and refugees, all of which he said the Trump administration and the Republicans are failing on.