Winder sent an email to his staff Tuesday, titled, "Goodbye and Thank You."

"On Sunday July 16, 2017, I will conclude my 32-year career with this agency," he wrote. "Words truly cannot express my deep appreciation for the opportunities this agency and the people who comprise it have afforded me. My single hope is that the effort and energy I provided over the course of my service has in some way benefitted those I have been honored to serve with and for."

Council Chairman Steve DeBry, who is also chief of the Millcreek precinct of the Unified Police Department, said he knew Winder didn't want any "fanfare" as he leaves to take his new position as Moab's police chief, but he thanked the sheriff for his service.

"Nobody knows the stress, the worry, the work — I don't have the vernacular to express what he felt at times going through what he went through to help comprise the UPD and help the citizens of this county," DeBry said. "I do know that he put his heart and soul into it. He did the very best he could in all aspects, and it takes a toll on people, on families."

Winder, a three-term sheriff of Utah's most populous county, will leave after years of fighting to manage an increasingly crowded jail. This year, his relationship with Salt Lake City Police Chief Mike Brown and Mayor Jackie Biskupski was strained over booking restrictions and difficulty managing the Rio Grande neighborhood. 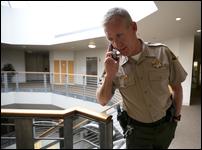 Salt Lake County Sheriff Jim Winder has yet to officially submit his formal resignation, but the campaigning to take his seat is well underway.

Councilman Jim Bradley also expressed best wishes for Winder and his family in Moab, crediting him for taking "significant steps" for the "regionalization" of Unified Police Department in the county.

Salt Lake County District Attorney Sim Gill said Winder had a "great partnership" with his office and thanked him for his role in criminal justice reform.

"I credit him for his leadership, his vision, his courage and his willingness to creatively work towards criminal justice reform and to help solve the challenges we have been facing," Gill said. "I could not have asked for a better public servant. … I'm going to really miss his presence and contribution."

After Winder's resignation, effective Sunday, the Salt Lake County Democratic Party will have 30 days to nominate a candidate to serve the remainder of the sheriff's term, which runs through 2018. The County Council will then have five days to consider the nomination.