FARMINGTON — A Layton man now charged with murder in the shooting death of his roommate told police that he "snapped" after the other man gave him a black eye.

Christopher Scott Fritz, who turned 20 last week, was charged Tuesday with murder, a first-degree felony, in the death of 24-year-old Taylor Vancamp.

Fritz and Vancamp were friends who lived in the same Layton house, 1407 E. 275 North, according to charging documents. On Dec. 19, the two men got into an argument, which turned into a fight. Details have not been released about why the two men were arguing.

After the fight broke up, Fritz went into his bedroom, which was across the hallway from Vancamp's room, and shut the door, charges state.

"Fritz said he looked in the mirror and saw that he had a black eye and bloody nose and then he 'snapped,'" charges state. 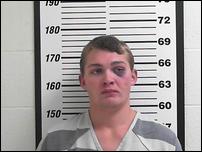 Man arrested in connection with fatal shooting at Layton home

Christopher S. Fritz, who turned 20 on Tuesday, was arrested Monday night in connection with the shooting death of 24-year-old Taylor Vancamp.

Fritz pulled a handgun from a dresser drawer, chambered a round and opened the bedroom door to find Vancamp standing in his own room across the hallway, charges state.

"Fritz said he then began to fire his gun at Taylor and continued firing until the weapon would not fire anymore," charges state.

Fritz's father, who lives downstairs in the home, heard the shots and came running, according to the charges. He found his son, who told him, "I killed Taylor," charges state.

A witness told police Vancamp shouted, "It wasn't me, bro!" before Fritz began firing, according to the charges.

An initial court appearance for Fritz is scheduled Wednesday morning.

Fritz's criminal history in Utah shows he was charged with DUI and failure to remain at the scene of an accident on Nov. 25. He also pleaded guilty to disorderly conduct in September, according to court records.