MANTI — A man charged with two counts of aggravated murder who faces a possible death sentence if convicted of killing a couple in their home, waived his preliminary hearing on Tuesday.

Logan Welles McFarland, 28, is charged with two counts of aggravated murder for the deaths of retired couple Leroy Woody Fullwood, 70, and his wife, Dorothy Ann Fullwood, 69, at their Mt. Pleasant home in December 2011. Prosecutors have stated they will seek the death penalty if he is convicted.

Because he waived a preliminary hearing, he was automatically ordered to stand trial on the charges.

On Dec. 29, 2011, McFarland was dropped off by his girlfriend, Angela Hill, 27, and another woman near the Fullwood residence. He allegedly told them "he wanted to get some 'stuff' from a garage so he could get some money." When they later picked him up, McFarland had a large duffel bag of guns, jewelry and other stolen items, according to charging documents. 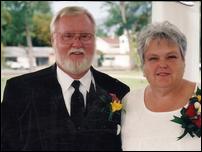 The case against a man accused of killing a Mt. Pleasant couple in their home has moved very slowly since prosecutors plan on pursuing the death penalty.

The next day, he called a relative and told him a "mission" had "gone south," charging documents state. Police say he later told the relative that he had "dispatched lives" in Sanpete County.

McFarland and Hill fled to Nevada after the killings. Their violent crime spree continued with a carjacking in West Wendover that resulted in the driver being shot in the head, a car theft in Wells, and a high-speed chase. The injured driver survived. The two were arrested on Jan. 3, 2012, near the small town of Oasis, Nevada, between Wendover and Wells, after they were tracked down by U.S. marshals.

In February of 2015, McFarland was extradited back to Utah to face the two murder charges.

Although McFarland waived his preliminary hearing, which was scheduled to start Tuesday, he did not enter a plea. An arraignment is scheduled for Oct. 3.

Hill, who is also known as Angela Atwood, who was charged with aggravated burglary, aggravated robbery, burglary and theft and who was also extradited back to Utah, also waived her preliminary hearing.

The third person charged in connection with the crime, Allison Boudreaux, who faces charges of aggravated burglary, obstruction of justice, and possession of a firearm by a restricted person, was scheduled to be in court for a status conference on Wednesday.