Rep. Jason Chaffetz, R-Utah, introduced legislation Monday based on the Mountain Accord, a 16-page document that represents consensus among state and local government officials, community leaders, and businesses and environmental groups on a long-term management plan for the canyons east of Salt Lake City.

Chaffetz said the bill would guide growth and preservation efforts for decades to come.

"Utah once again leads the way in demonstrating the power of a collaborative approach to local problems. I’m pleased that so many parties with such varied agendas could come together in agreement on a way forward for our beloved Wasatch Mountains," he said.

The legislation would protect nearly 80,000 acres of public land and concentrate development within certain boundaries. It also would:

Salt Lake County Mayor Ben McAdams, a Democrat, said the legislation is needed to give direction to the federal government and the Forest Service on how local leaders want the lands managed.

Various interests have been tied up in litigation and contentious battles about the Wasatch Mountains for decades, but the bill shows there's a better way than through the courts to reach an agreement, he said.

Nobody got everything they wanted, McAdams said, but in the end it struck a balance that's good for the environment, the ski industry, recreation, transportation and water quality. 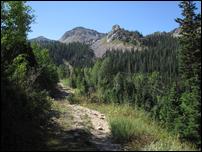 Are you willing to pay a fee to use trails in Big and Little Cottonwood canyons?

The National Forest Service is proposing a new fee structure for a number of popular trails in Big and Little Cottonwood canyons. The Forest Service said the money collected would help pay for maintenance and improvements of the trails.

State lawmakers have traveled to Switzerland to look at mountain railway systems and pitch the Mountain Accord to an expansion-minded Swiss rail company. The accord doesn't recommend rail as a possible new mode of canyon transportation, but it doesn't reject it either.

Chaffetz's bill doesn't advance or stop that idea but leaves that conversation for another day, McAdams said.

"I personally don't believe that a train is a necessary expenditure," he said, adding that better bus service would relieve traffic congestion in the canyons.