5PM: Imprisoned teacher in Davis sex case says she had no 'evil' intent

SALT LAKE CITY — Imprisoned teacher Brianne Altice says she had no "evil or malicious" intent in a handwritten response to a federal lawsuit filed against her by one of the teenage boys she sexually molested.

The former Davis High School English teacher starts the two-page court filing writing, "At this time I cannot afford proper counsel to defend myself." She goes on to respond to 18 allegations listed in the lawsuit, acting as her own attorney.

In addition to Altice, the boy, now an adult, sued the school and the Davis School District last December, saying administrators knew the teacher acted inappropriately during and after school, on and off school property, but did nothing to protect him and the other victims.

The boy was 17 when he was in Altice's class in 2013 and also served as her teacher's assistant. He confided in her about his troubled childhood and that he was physically and sexually abused as a child, the lawsuit says. Altice, the suit says, took advantage of his vulnerabilities and began flirting with him during school.

Police say Altice, 36, befriended the boy and two others while they were students, eventually progressing to three separate sexual relationships, meeting the teens for sex at parks, in cars and at her home while her husband was away. She has since divorced.

"Ms. Altice had no evil or malicious intent to cause harm," Altice wrote in the March 14 response mailed to U.S. District Court from the state prison.

Altice pleaded guilty in April 2015 to three counts of forcible sexual abuse stemming from sexual relationships with the students who were 16 or 17 years old at the time. A 2nd District judge sentenced her to 30 years in prison. 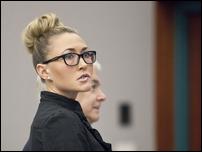 Another victim in a teacher sex case is suing the Davis School District and Davis High School in federal court, saying administrators failed to protect him from her.

Altice writes that the teen came to her for advice on how to repair the strained relationship with his parents. She says she told him to keep talking to his parents and doing his best in school.

The boy and other male students often made comments to Altice such as "you’re hot" and "you’re sexy," according to the lawsuit.

But Altice contends he "often assisted Ms. Altice in her attempts to thwart inappropriate comments directed at her."

Attorneys say in the lawsuit that the running joke at the high school was, "Who is Ms. Altice sleeping with now?"

Altice wrote that she could not comment on high school rumors, "considering they are hearsay. She heard and knew nothing about them."

Davis school officials deny they failed to protect the student. State attorneys contend that when administrators found out about Altice's inappropriate relationship with the teenager, they immediately placed her on administrative leave, contacted police and later fired her, according to court documents.

One of the other victims and his parents also sued Davis schools and Altice in federal court earlier last year after a judge dismissed their case in state court.

Both federal lawsuits seek an unspecified amount in damages for physical, mental and emotional pain, and expenses for counseling and therapy. They also seek punitive damages.