SALT LAKE CITY — The death of one of the U.S. Supreme Court's strongest conservative voices is likely to have a major impact on cases currently under review by the nation's top judicial panel, a University of Utah legal expert says.

Justice Antonin Scalia died in his sleep of natural causes on Saturday while on a hunting trip.

Now with the political balance of the court even at 4-4, many of the high-profile cases currently under consideration may not be resolved during this judicial session. Constitutional law professor Erika George said Scalia's passing "truly changes everything important before the court this term."

"Scalia's death will leave lower (federal) court rulings in place and potentially leave in limbo questions over the meaning of "one person, one vote," the contraceptive mandate, (President Barack) Obama's immigration policy and affirmative action in higher education," she said.

Obama praised Scalia as a "towering legal mind" who led a "remarkable life," but also vowed to "fulfill my constitutional obligation to appoint a successor — in due time."

The president's comments drew criticism from some Republican leaders who said the vacancy should not be filled until the next president is elected.

To Kirk Jowers, former director of the Hinckley Institute of Politics at the University of Utah, such partisan opposition is to be expected and he said it is highly unlikely the president will be able to fulfill his wish to install the next Supreme Court justice.

"The president will undoubtedly nominate someone, the Republican-led Senate will undoubtedly do everything they can to hold it up," Jowers said. "This isn't any seat (on the Supreme Court). He was the leader of the conservative judicial movement."

Jowers noted that replacing a steadfast conservative with a liberal jurist on the high court would almost certainly swing majority votes in favor of the more liberal ideology of the political spectrum.

He expects Obama will use "quite a bit of his political capital" in an attempt to push a nomination through, but said "his problem is that Republicans hold the Senate and the Judiciary Committee."

"My guess is that they will not let it happen in a presidential election year," he said.

U. law professor Amy Wildermuth characterized Scalia as an influential jurist whose legacy will live on for years to come.

"This is quite a shock," said Wildermuth, who was a law clerk for Justice John Paul Stevens and had "firsthand experience" with Scalia. "It's clear that one of his lasting impacts was to push the law in very new and different directions given his particular ideology."

She said Scalia was very effective in his ability to shape what kinds of cases made it through federal court and could potentially be heard in the highest court. He also was much more of a literalist when it came to interpreting the Constitution.

"He advocated for "ordinary, plain meaning to prevail," Wildermuth said. "(He thought) that we should have an approach that would be sensible to the ordinary people on the street."

He moved the agenda in a way that few on the court ever had, she said.

"It would be hard to say that there has been another Supreme Court justice that has changed the law so substantially in a very new and different direction," she said. 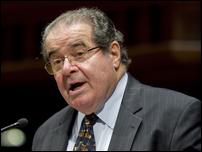 Antonin Scalia, the influential conservative and most provocative member of the Supreme Court, has died, leaving the high court without its conservative majority and setting up an ideological confrontation over his successor in the maelstrom of a presidential election year. Scalia was 79.

"Justice Scalia was a giant of the law and a true patriot. He devoted nearly four decades of his life to public service. As a scholar and a jurist, he led a much-needed revolution in the law, based on the enduring principle that the role of a judge is to say what the law is, not what the law should be. His opinions, filled with unmatched wit, will continue to shape our nation for decades to come," said Sen. Orrin Hatch, R-Utah.

Gov. Gary R. Herbert said he was sad to hear of Scalia's death.

"A true legal giant, he will be remembered as an unwavering defender of the Constitution with strong resolve and exceptional intellect. As one of the longest serving justices on our nation's highest court, his impact on this country will not be forgotten," Herbert said.

Sen. Mike Lee, R-Utah, called Scalia "one of the greatest" justices of all time.

"His intellect was admired by Americans of all political persuasions and his consistent fidelity to the text and original meaning of the Constitution have transformed the way we all approach the law," he said.

"He was a man of God, a man of principle and an unwavering defender of the rule of law and the Constitution," he said.

Rep. Chris Stewart, R-Utah, called him the court's "principal voice of conservatives" since 1986.

"He was undoubtedly the wisest nomination made by President Ronald Reagan. We will miss him and his reasoned influence on the court. I hope his replacement will strive to honor his legacy of protecting the Constitution."