SALT LAKE CITY — Utah head coach Kyle Whittingham announced at his Monday press conference that Dominique Hatfield has been reinstated with the program.

"He'll play as soon as he's ready," Whittingham said. "As things are turning out, it was our belief, in fairness, he was deserving to be able to be reinstated back onto the football team."

Whittingham said he made the decision with consultation with athletic director Chris Hill and that he felt Hatfield had served "enough of a punishment." Whittingham added that Hatfield would be able to play "whenever he is ready" but that there was no specific timeline.

"If he's ready this week, he'll play," Whittingham said. "If he's not, it could be something like three weeks." 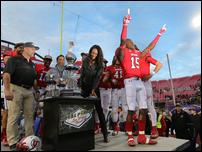 Dominique Hatfield continues to lead despite dismissal from program

Dominique Hatfield has been in the news for all the wrong reasons the last couple of months. But despite the ongoing legal issues he faces and less-than-certain future with the Utah football program, Hatfield continues to lead.

Whittingham said previously that the university had closure on both incidences and was waiting for the legal process to move along before reinstating Hatfield to the program. Whether the misdemeanor charges against Hatfield will remain are unknown at this time.