SALT LAKE CITY — A statewide pilot program hoping to identify high-risk domestic violence victims and then intervene before a situation becomes deadly is now rolling out in four Utah communities.

Has your partner ever used a weapon against you or threatened you with a weapon?

Is he or she violently or constantly jealous, or does he or she control most of your daily activities?

Have you left him or her or separated after living together or being married?

Developed in Maryland, those and eight other questions that make up the Lethality Assessment Protocol are designed to help first responders in a domestic violence call determine in a matter of minutes whether there is a greater risk to address, and then refer the victim to help.

The questions don't just help first responders, Wood Cross Police Chief Greg Butler explained at a meeting about Utah's pilot program. For many victims, it's the first time they realize they're in danger.

"My first year in West Jordan, I saw about 20 people killed in domestic violence situations," Butler said. "The victim doesn't get the situation they're in. They don't realize they're in danger … but all the officers can see it."

The Woods Cross Police Department was the first in the state to implement the lethality protocol, seeking out a grant to bring in Maryland officers and officials for training and putting the survey into practice two years ago. At the introductory meeting this week, Sgt. Adam Osoro shared details of one of the department's first implementations of the protocol, which he credits for saving the life of a mother and her three children.

Osoro described how a Woods Cross woman's husband had become increasingly violent and disturbingly possessive as their marriage dissolved over time, tracking her movements and sending her veiled threats. The woman initially resisted making any kind of report against her husband, even canceling two protective orders after he had violated them.

My first year in West Jordan, I saw about 20 people killed in domestic violence situations. The victim doesn't get the situation they're in. They don't realize they're in danger &#x2026; but all the officers can see it.

Some of the details most troubling to officers — like the man leaving a round of ammunition on the woman's car while she was at work or around town, or breaking into her home to make her bed and leaving items on her pillow — weren't as alarming to the woman, who struggled to believe her husband was capable of greater violence.

It's an example, Osoro explained, of the tendency many domestic violence victims have to downplay or rationalize the dangerous situation they're in.

After another encounter between the woman and her then-ex-husband in November 2012, Woods Cross officers refered to the Lethality Assessment Protocol and determined she was in danger, getting her and the couple's three children out of the house.

After going to the house looking for his ex-wife and kids, the man eventually barricaded himself from police inside his pickup truck and shot himself. Inside the truck, police found a large amount of ammunition and medical supplies, leading police to believe his initial plan had been to harm the woman and her children, Osoro said.

Though divorced for about two years, the man was wearing his wedding band when he died, Osoro noted.

In 2014, more than half of Utah's 64 homicides — the killing of one person at the hands of another — were committed by someone related to the victim or someone with a personal tie to the victim prior to the killing, according to statistics kept by KSL. That includes intentional killings, accidental killings and acts of self-defense.

5 ways to respond to victims of domestic violence

If you are in a position of witnessing or hearing about domestic violence, here are some ways to react to help protect the victim.

Over the next year, first responders in four target areas — Davis County, Cache County, West Jordan and Cedar City — will be using the same protocol in domestic violence cases in hopes of intervening before a domestic violence scenario has a chance to escalate.

The program officially launched this week, with more than 150 officers and 60 victim advocates trained to use the protocol to identify high-risk victims and connect them to partner service providers for help with counseling, case management, legal advocacy and shelter.

"It is a simple protocol, but it's not as simple as just asking the questions. It involves connecting with service providers, it involves training (local) trainers, training law enforcement and training victim advocates," said Maggie Bale, the program's coordinator. "We're trying to roll this out as quickly as we can, but it's also a learning process. … We don't want people to take it and run with it — we want to build excitement, but we want to do this the best way possible."

First responders will use the lethality protocol questions to interview victims at the scene, explaining the protocol and placing a call to a domestic violence service provider on the victim's behalf if a high risk scenario is flagged.

In Maryland, 54 percent of victims questioned with the lethality protocol register as high-risk cases, Donna Kelly, domestic violence and sexual assault resource prosecutor, explained Wednesday. About 59 percent of those choose to speak with a hotline worker, and 33 percent seek services.

Between 2006 and 2008, none of the victims who were screened as high-risk and sought services were killed in later domestic violence incidents.

"That's phenomenal that we could save that many people's lives," Kelly said, noting that Maryland saw a 34 percent decrease in domestic violence homicides over five years.

If a victim declines services, first responders are trained to advise that domestic violence is dangerous and urge the victim to watch for danger signs in his or her life, Kelly said. 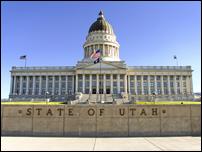 Einfeldt, now 17, stifled tears Monday as he read a poem he wrote about his sister, Megan Einfeldt, at a rally to support funding for Utah's nonprofit domestic violence victim services.

According to a 2014 census by the National Network to End Domestic Violence, 135 requests for services from 17 different domestic violence programs in Utah were turned away in a single day because of a lack of resources.

Though it may in part be the result of a "better safe than sorry" approach, the first few implementations of the protocol all flagged high-risk cases, Bale said.

"It's better to screen them in even if (some victims) aren't technically high danger because we'd rather have them get connected with services and be safe," Bale said.

Momentum and attention for the lethality program is building daily, according to Bale. The Utah Domestic Violence Coalition is already preparing a funding request for the next fiscal year on behalf of police departments and advocates who are interested in the program.

"We're working to go out into the community and reach out to people that we think would be great partners, and then people are hearing about it and coming to us," Bale said. "We haven't solidified our funding request yet, but already we're expanding everywhere in the state."

As the program moves forward, Bale will be tracking the number of victims screened using the lethality protocol, what services they receive, and any measurable outcomes. She is convinced that the benefits will be clear and positive.

"We know that this will work," Bale said.

Resources for victims of domestic violence
×