HILL AIR FORCE BASE — A new squadron of fighter jets started arriving Wednesday at northern Utah's Hill Air Force Base, which will serve as an operational base for the new F-35.

Two F-35 jets touched down Wednesday afternoon at the base after departing from a manufacturing facility in Fort Worth, Texas. The F-35 is a new fighter jet that the Air Force, Navy and Marine Corps will be using.

The Air Force version costs about $130 million each.

The F-35, also called the Joint Strike Fighter, is replacing the F-16 with greater speed and combat range and lower maintenance costs due to a computerized self-test system, according to the Air Force.

A total of 72 of the fighter jets and their pilots will be permanently based in Utah.

One to two additional jets are expected to arrive every month until the full fleet is in place sometime in 2019.

The base is also a maintenance center for the jets and has already had 13 of them brought in for modifications and 40 check flights.

The squadron coming to Hill is expected to be declared ready for combat in late 2016 after enough F-35s have arrived, pilots are ready to perform various operations with them and several support and logistical systems are up and running.

In July, a Marine Corps squadron of F-35s based in Yuma, Arizona, became the military's first batch of the jets declared combat-ready.

The Air Force said in 2013 it chose northern Utah as its first operational base for the jets over several other locations because of the ample open space at the Utah Test and Training Range in a rural, northeastern part of the state, among other reasons.

To prepare for the new aircraft, Hill spent more than $120 million, including constructing a $13.5 million hangar.

The base will start phasing out its older F-16 jets, but for a while both models will be in operation at the base.

The United States has ordered more than 2,400 of the jets, according to F-35's developer, Lockheed Martin Aeronautics Co. 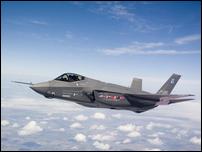 This September, the next generation fighter jet will start to arrive at Hill Air Force Base. The F-35 is getting an increase in funding from the President's 2016 budget.
×