The release came almost two weeks after the Utah State Records Committee ruled the document was public record. That ruling was made in light of a public records request from the Herald Journal that was denied because Maverik claimed business confidentiality in the contract.

USU and Maverik had the option to appeal the committee's decision, but they ultimately decided to release the document because of surfacing rumors about what the contract entailed, according to USU spokesman Eric Warren.

"Our attorneys thought through the processes and we spoke with Maverik, and we just thought that, based on speculation that had started to go out, it was better to release it," Warren said.

The contract begins Jan. 1, giving Maverik naming rights to the former Romney Stadium. Maverik will make quarterly payments to USU of $87,500, adding up to $6.3 million over the course of the 18-year agreement. If fewer than five home games are played at the stadium in a season, USU will negotiate a partial refund of the payments.

Maverik Stadium signs will be posted on the west side of the stadium's new press box, which is currently under construction, as well as on the south scoreboard and the south side of the adjacent athletics complex. The football field will remain known as the Merlin Olsen Field.

The contract gives Maverik limited in-game advertisement videos and public announcements as the only convenience and petroleum store with sponsorship rights at the stadium. The company will also be allowed to advertise and participate in tailgating activities there.

As the official gas station and convenience store of USU's football team and sponsor of Maverik Stadium, Maverik will be given as many as 40 tickets per home game. That includes 10 seats in one of the executive suites, 10 lower-bowl seats for promotional giveaways, and up to 20 additional tickets upon request and depending on availability. 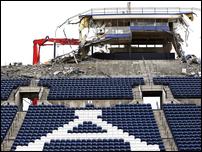 USU will also sell Maverik products, including a Maverik/USU-themed cup, at a Bonfire Grill concession stand within the stadium.

The agreement gives Maverik exclusive negotiations to renew the contract with USU three years prior to the deal's end, but if the parties fail to reach an agreement by the two-year mark, USU will be open to negotiate with other entities.

Warren said Maverik waived the confidentiality agreement in the contract to allow it to be released, even though USU and Maverik still believe it was information protected under the law. He said it's unclear whether the contract's debated release will set a precedent for future naming rights agreements at the university.

"We'll look at opportunities as they come, and we'll deal with those on a case-by-case basis," he said. "We want to thank Maverik for being willing to waive the agreement's confidentiality clause to disclose the information that USU and Maverik believe to be recognized by the law as protected."

Maverik spokesman Aaron Simpson said the company's partnership with USU was unaffected by the State Records Committee hearing or the contract's disclosure.

"Really at the end of the day, as we talked to Utah State, it felt like the story was becoming more about the contract than the great stuff going on up there with the football program and the stadium," Simpson said. "We reiterate our support for them. We couldn't be more excited about them as a partner and the football program going forward."

Joel Campbell, an associate professor of journalism at BYU and board member of the Utah Headliners Chapter of the Society of Professional Journalists, was one of those who argued before the State Records Committee for the contract's release.

He said the public should be allowed to know the terms of such a large agreement when it involves a public university.

"With that kind of money and that kind of long-term contract, I do understand a little bit Maverik's concern," Campbell said. "But at the same time, when we're talking about the reputation of a state institution and state money, … it seems like there ought to be some public oversight somewhere along the way."