Missed chances pass RSL by in loss at Vancouver

VANCOUVER, British Columbia — Real Salt Lake thought it did enough for a draw.

Considering that was all the team needed going into a road match against the Vancouver Whitecaps on Saturday to clinch a berth in the MLS Cup playoffs, that isn’t necessarily a bad thing.

RSL held the ball 57 percent of the time, nearly drew even with the Whitecaps on shots at 16-17, and even had backup goalkeeper Jeff Attinella save a penalty kick right at the first-half whistle.

But the only number that mattered was on the scoreboard at BC Place: a 2-1 win to Vancouver. RSL will have to wait to clinch passage into the club’s seventh-straight postseason.

“The quality that Real has been typically known for just wasn’t there,” RSL coach Jeff Cassar said following the match. “The fight was there, the intensity was there, but we just didn’t play good enough soccer tonight.

I actually thought our soccer was pretty good. You know, it's a team that had their backs against the wall, and you saw them tonight that they were fighting hard on every play. There was no give up on that team, and that's a credit to coach (Carl) Robinson. They kept going. We kept going, too, but it just wasn't our night.

RSL has plenty of time to see its postseason dreams become reality. After an interleague friendly Tuesday against third-division USL Pro champion Sacramento Republic FC, the club ends the final month of the MLS regular season with the two lowest teams in the Western Conference — a home bout with San Jose, a home-and-away with Chivas USA, and a clash at the Portland Timbers, who lost team captain Will Johnson to a broken leg Saturday.

Clinching a playoff berth isn’t a big deal for the club that has reached every postseason since winning the MLS Cup in 2009. The result probably speaks more to Vancouver than it does RSL; the Whitecaps jumped ahead of the Timbers for fifth place and the final playoff spot with Saturday’s result.

“I actually thought our soccer was pretty good,” Cassar said. “You know, it’s a team that had their backs against the wall, and you saw them tonight that they were fighting hard on every play. There was no give up on that team, and that’s a credit to coach (Carl) Robinson. They kept going. We kept going, too, but it just wasn’t our night.”

Despite giving up two second-half goals to Vancouver’s Pedro Morales, it was a good night for Attinella. The first-year reserve goalkeeper stepped in for Nick Rimando (who did not make the trip from Salt Lake City) and shined in his eighth start of the year, the first since Rimando returned from World Cup duty on July 4. He saved Morales’ penalty kick in the 44th minute, and RSL took a brief lead through Nat Borchers’ 57th-minute header before Vancouver scored in the 62nd and 78th minutes.

“That’s my role right now,” Attinella said. “I get a couple of days notice, and I’ve just got to be ready. I’m kind of used to it at this point, but it’s always exciting to get to play. Obviously, you just want to get a result.” 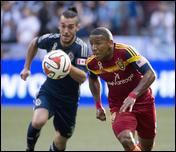 Pedro Morales scored his second goal of the game in the 78th minute in the Vancouver Whitecaps' 2-1 victory over Real Salt Lake on Saturday.

Attinella wasn’t the only reserve replacement for RSL, either. Cassar made four changes from his lineup that smashed Colorado 5-1 the previous week, including inserting Abdoulie Mansally and Carlos Salcedo into the back line for regular starters Tony Beltran and Chris Schuler.

“We battled, and we were unfortunate not to get a result,” Attinella said. “Two PKs against, that’s pretty tough, and then a shot that’s going wide that happens to land at somebody’s foot. The ball didn’t bounce our way, and we battled — you’ve got to do that on the road in a tough place when the team’s fighting for the playoffs. We were just unfortunate, but we fought hard enough to get a point, that’s for sure.”

Chivas has been officially eliminated from the postseason, and RSL will face the Goats on Sunday at StubHub Center in Carson, California. If the Salt Lake side can’t find a result there, the team can still look to get three points out of a home match against San Jose the following week.

Now RSL is looking forward to packing up and moving forward.

“We’ll work hard this week in practice and come out next week firing.”