VERNAL — An Oregon parolee has been charged in connection with a bizarre one-day crime spree in Uintah County that ended when investigators say he tried to disarm a police officer, causing the officer's gun to discharge inside a hospital.

Prosecutors have also charged Olson, 30, with multiple felony counts of criminal mischief, joyriding and failure to stop at an officer's command. He also faces misdemeanor charges of DUI, interfering with an arrest, burglary of a vehicle and trespassing.

On April 26, Olson caused thousands of dollars in damage when he drove a pickup truck through chain-link fences at one business in Vernal and two businesses in Naples, according to charging documents. At each business he tried to steal a vehicle, investigators said.

Police witnessed two of the attempted vehicle thefts and were trying to stop Olson when he climbed inside a crane truck parked outside of one of the businesses, Naples Police Chief Mark Watkins said a short time after Olson's arrest.

"One of the officers was alongside the crane truck at that point and used a Taser on the guy," the chief said. "It had no effect on him, and the fight was on."

After his arrest, Olson was taken to Ashley Regional Medical Center because it appeared he was high on meth, Watkins said.

While he was at the hospital, Olson told the officer guarding him that he needed to use the bathroom. When the officer removed Olson's handcuffs, he hit the officer several times "with a closed fist," the charges state. 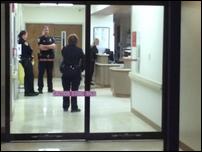 Officer injured when parolee attempts to disarm him inside hospital

A Naples police officer suffered shrapnel injuries Saturday when a parolee from Oregon attempted to disarm him inside the emergency room at Ashley Regional Medical Center, authorities said.

"During the course of the physical altercation, James Olson attempted (to take) and at one point controlled (the gun) and began to disarm officer Jason Bateman," charging documents state.

The officer's gun discharged once during the struggle, with the bullet striking the cement floor. The officer suffered a shrapnel injury to his thumb, as well as "minor abrasions and lacerations" to his arms, face and fingers, the charges state.

Olson was secured and booked into the Uintah County Jail, where he as been held without bail since his arrest.

Oregon Department of Corrections spokeswoman Betty Bernt confirmed Monday that Olson served nine months in prison in that state for eluding police and possession of meth. He was paroled in November and allowed to move to Utah, where he is supervised by Adult Probation & Parole under an interstate compact.

Court records in Utah show Olson has recent misdemeanor convictions in Duchesne County for assault and violation of a protective order. He was also convicted of attempted armed robbery in 2001 in Washington, according to Watkins.

Olson is due back in court June 18 for a preliminary hearing.