SALT LAKE CITY — The Bureau of Land Management continues to round up close to a thousand head of cattle grazing on Nevada federal land.

The owner of the cattle said he's done nothing wrong, but the the BLM says he hasn't paid grazing fees for more than 20 years.

Patrick Shea was the director of the Bureau of Land Management from 1997 to 1999. He said Nevada rancher Cliven Bundy and his cattle were on his radar even back then.

"I wish Mr. Bundy would mind his law requirements and not try to play to the television cameras about confronting the evil federal government," Shea said.

Part of the law requires ranchers to pay grazing fees when their cattle roam federal lands. Shea said this protects the land from overuse and damage.

Bundy and his family said this isn't about unpaid fees.

"The grazing fees are quite minimal," said Bundy's son, Randy Bundy. "That was never the issue. We keep putting the federal government and the United States flag above everything. We are not anti-government. We are a pro proper government according to our Constitution."

Cliven Bundy maintains that he doesn't owe the federal government money, because he says his ancestors lived on the land long before the BLM was formed.

"I would pay my grazing fees, if I owed some, to the proper form of government," said Cliven Bundy. "I belive that is Clark County, Nevada." 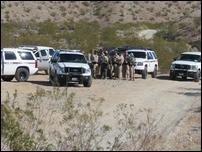 A man has been released after being arrested Sunday during an ongoing dispute over grazing rights between the Bureau of Land Management and a family in southern Nevada, and the family is calling for action.

But a federal judge disagreed and issued an order allowing the BLM to round up all trespassing cattle and auction them off. The action has led to confrontations, some of them violent, between federal rangers and Bundy's supporters.

"The public ought to know that federal officials live in dangerous situations and because some wacko, in my opinion, who is trying to make a confrontation, they should not sympathize or support that confrontation," Shea said.

Shea has seen both sides of the land-use debate. He represented activist Tim DeChristopher, who went head-to-head with the BLM over the 2008 sale of controversial oil and gas leases in Utah. In this situation, he believes the Bundys are disobeying the law.

"I consider them to be hypocritical in the sense that they do everything according to the laws as they interpret it, but when it's interpreted against them, they're unwilling to abide by it," he said.