LOS ANGELES — The disintegration of an asteroid was witnessed for the first time in the asteroid belt with the help of the Hubble Space Telescope, astronomers announced Thursday.

The asteroid broke into as many as 10 pieces over several months, according to research published in Astrophysical Journal Letters. Astronomers first noticed the crumbling asteroid, named P/2013 R3, on Sept. 15.

"Seeing this rock fall apart before our eyes is pretty amazing," astronomer David Jewitt said in a statement.

Researchers said it was the first time this type of breakup has been observed in the asteroid belt. Other fragile asteroids, made of ice and dust, have been seen disintegrating while approaching the sun.

P/2013 R3 was observed using the Hubble Telescope after astronomers spotted it during sky surveys and examined it from the W.M. Keck Observatory in Hawaii. 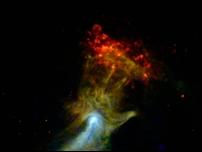 NASA has nicknamed one of its newest images the "Hand of God."

"The Keck Observatory showed us this thing was worth looking at with Hubble," Jewitt said. "With its superior resolution, space telescope observations soon showed there were really 10 embedded objects, each with comet-like dust tails. The four largest rocky fragments are up to 400 yards in diameter, about four times the length of a football field."

The pieces of the asteroid are still moving away from each other — but at a leisurely pace of about one mph. The number of pieces also appears to be increasing.

Researchers believe sunlight's subtle effect is causing pieces of the asteroid to pull apart. In order for this to happen, they said the asteroid likely had a non-destructive collision with another asteroid in the last billion years, which caused the interior to fracture.

They said most of the asteroid's fragments, which collectively weigh about 200,000 tons, will crash into the sun, but some will become meteors.