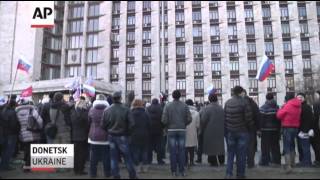 KIEV, Ukraine (AP) — As separatists in Crimea kept up pressure for unification with Moscow, Ukraine on Sunday solemnly commemorated the 200th anniversary of the birth of its greatest poet, with the prime minister vowing not to give up "a single centimeter" of Ukrainian territory.

"This is our land," Arseniy Yatsenyuk told a crowd gathered at the Kiev statue to writer and nationalist Taras Shevchenko. "Our fathers and grandfathers have spilled their blood for this land. And we won't budge a single centimeter from Ukrainian land. Let Russia and its president know this."

"We're one country, one family and we're here together with our kobzar (bard) Taras," said acting President Oleksandr Turchynov.

A choir sang, and people laid bouquets at the monument to the son of peasant serfs who is considered the father of modern Ukrainian literature and is a national hero.

Later Sunday, following an extraordinary meeting of the Ukrainian government, Yatsenyuk announced he would be flying this week to the United States for high-level talks on "resolution of the situation in Ukraine," the Interfax news agency reported.

Crimea, a strategic peninsula in southern Ukraine, has become the flashpoint in the battle for Ukraine, where three months of protests sparked by President Victor Yanukovych's decision to ditch a significant treaty with the 28-nation European Union after strong pressure from Russia led to his downfall. A majority of people in Crimea identify with Russia, and Moscow's Black Sea Fleet is based in Sevastopol, as is Ukraine's.

This weekend, Russia reinforced its armed presence on the peninsula. Russian President Vladimir Putin's foreign minister ruled out any dialogue with Ukraine's new authorities, whom he dismissed as the puppets of extremists.

The regional parliament in Crimea has set a March 16 referendum on leaving Ukraine to join Russia. Senior lawmakers in Moscow have said they would support the move, ignoring sanctions threats and warnings from President Barack Obama that the vote would violate international law.

In Simferopol, the Crimean capital, a crowd of more than 4,000 people turned out Sunday to endorse unification with Russia. On Lenin Square, a naval band played World War II ditties as old women sang along, and dozens of tricolor Russian flags fluttered in the cold wind.

"Russians are our brothers," Crimean Parliament speaker Vladimir Konstantinov said. He asked the crowd how it would vote in the referendum a week hence.

"We are going back home to the Motherland," said Konstantinov.

Across town, at a park where a large bust of Shevchenko stands, around 500 people, some wearing yellow-and-blue Ukrainian flags on their shoulders like capes, came out to oppose unification with Russia. They chanted "No to the referendum!" and "Ukraine!" People handed out flyers, one of which laid out the economic troubles that joining Russia would supposedly cause.

"We will not allow a foreign boot that wants to stand on the heads of our children," one of the speakers, Alla Petrova, said. "The people are not scared. We are not scared to come out here and speak."

Some pro-Russians drove by, shouting "Moscow, Moscow!" from their cars, but there was no trouble.

He also said the March 16 referendum was happening "ridiculously quickly." Hague added, "The world will not be able to regard that as free or fair."

Danica Kirka in London and Tim Sullivan in Simferopol contributed.