JENSEN, Uintah County — One year after a massive propane explosion leveled its shop, Adler Hot Oil is about to reopen amid concerns by some neighboring businesses whose buildings also sustained heavy damage in the blast.

"We talked to our general contractor about the cost of building a blast-proof wall, but that's not feasible," said Robert Roth, director of safety and human resources for Matt Betts Trucking.

The trucking company's shop and office was heavily damaged in the March 2, 2013, explosion that left a crater across the street where Adler Hot Oil's shop had stood. One year later, its shop and office are still undergoing repairs and cannot be occupied.

"It's been challenging," Roth said, "having to outsource a lot of the stuff we would normally do in-house. We went from a four- or five-bay shop to a one-bay shop. We've been trying to keep our maintenance up."

Matt Betts Trucking and Adler weren't the only businesses damaged by the explosion, which was heard around the Uinta Basin and in neighboring Colorado. A total of 22 buildings in the Ashley Valley Industrial Park and four nearby homes sustained varying degrees of damage.

One house still cannot be occupied because county officials are waiting for information from the homeowner. A warehouse also had to be torn down due to extensive destruction, while other businesses underwent months of repairs.

"It has been arduous to say the least," said Tracy Honeycutt, general manager of Split Mountain Travel Plaza, which was shuttered for remodeling for four months. The company's truck wash and scales still haven't been repaired. 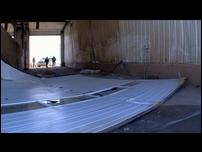 Business struggling to regroup after massive explosion in Jensen

Fire officials continued to investigate the cause of a powerful explosion that damaged nearly two dozen businesses and four homes earlier this month.

Working to fix everything has taken a physical toll on Honeycutt.

"I did suffer a heart attack in May that was stress induced," she said, noting that customers numbers have risen since the convenience store reopened in July, but are still not where they were before the explosion.

"We're hoping that with winter almost behind us and summer coming up — our busiest months — that we'll regain those customers that were diverted to other locations while we were remodeling," Honeycutt said.

Like its neighbors, Adler Hot Oil is also rebuilding. It's the third time in less than four years the company has had to start over. A midday fire in November 2010 gutted its first shop and the 2013 midnight explosion demolished its second.

That track record concerns some, including Roth.

"You've just got to hope that safety precautions have been put in place to prevent something like this from happening in the future," he said.

Firefighters and building officials in Uintah County said Wednesday that they've done just that, and Adler's leadership has been actively involved in the process.

"We've made them put a lot of systems in that building to … try to prevent any future problems," deputy Uintah County building official Aaron Eaton said.

"They've done everything we've asked them to do," he added.

The new shop will be equipped with a gas detection and alarm system, as well as a mechanical ventilation system. Adler has also adopted a "pretty extensive policy and procedure manual" that no longer allows trucks to be parked inside the building with any amount of propane onboard, Eaton said.

So far, two lawsuits have been filed against Adler in connection with last year's explosion. Company president Ryan Runolfson declined an interview request Wednesday, saying he'd "been advised not to talk."