Video of daughter unwrapping 'dad in a box' goes viral 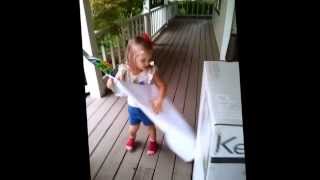 Dad In A Box

CHICO, Calif. — After being gone for four months, a father decided to give his 3-year-old daughter a surprise she would remember for years to come.

Josh Carr works as a civilian for the U.S. government and had been deployed to Afghanistan for four months. His wife and two daughters had been living with his parents in California during his absence. It was the second time in two years he had been away from his family for an extended period of time.

His mother, Julie Carr, said before he returned home, she pitched an idea to her daughter-in-law, Chloe.

“We realized Bridget’s third birthday was coming up right around the same time Josh was getting home,” Carr said. “I asked Chloe if she would be OK with us doing something a little different.”

Carr said they decided it would be fun to wrap Josh up in a big box.

“We decided to have her unwrap the big box before any of the party guests arrived in case she was overwhelmed by the surprise,” Carr said.

Josh climbed in the box and together, his mother and his sister, Amber, wrapped it up on the porch and rang the doorbell.

It was a special moment. We hope the video can bring hope to those who have loved ones serving far away in the military, or that it can just teach a lesson about the strength of the bond between a father and a daughter.

“I yelled ‘Bridget! Your first present is here,’” Carr said.

Carr said Amber was set to take still photos of the unveiling but "when we got to the door my daughter said, ‘Oh mom, you should film it.’”

Carr said she’s glad she did. The video has since garnered more than four million views on YouTube and various news outlets have covered the story. She said they’ve been overwhelmed with the reaction.

“We’ve seen some negative comments on the video, but most have been very positive," Carr said.

After Bridget Carr tore the wrapping paper off the box, her father popped out and the young girl flung herself into his arms.

“It was a special moment,” Carr said. “We hope the video can bring hope to those who have loved ones serving far away in the military, or that it can just teach a lesson about the strength of the bond between a father and a daughter."

Josh and Chloe have since returned to live back at their home in St. Louis, Mo.