PROVO — A student in Provo is hoping to engage other college-age voters in local politics by running for the state Legislature himself.

Colby Johnson, 25, is running to represent Utah House District 63, which he said is home to a population that comprises 84 percent college students. He launched his campaign Monday and said he isn't running on a specific platform; instead, he wants to engage the community.

Areas with large numbers of college students can face special challenges in getting people to vote in local elections because many students don't change their voter registrations from their hometowns. Johnson, a corporate finance major at Utah Valley University, said this can be tough because even though students aren't registered where they attend school, it is where they do business, pay taxes and live.

Johnson said his campaign has found success in persuading students to register in Provo. Air-quality issues have especially resonated with students, and his team is running a campaign called "Vote Where You Breathe" to let students know the air quality doesn’t have to be bad if they speak up. 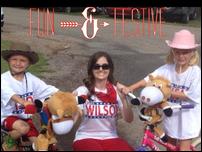 Maile Wilson has been busy since being elected as Cedar City's first woman mayor.

"If students register to vote in this area and contact their representatives, they can actively participate in change, rather than just wishing it would happen,” he said.

Other issues he thinks are particularly important to students are education, housing and economic development.

Johnson decided to run for office more than a year ago and has teamed up with student organizations such as BYU College Republicans and UVU College Republicans to try to get students to vote in the upcoming election. He said he isn't worried about the possibility that his campaign might not appeal to those voters who aren't college students.

“The unique thing about my campaign is that I’m running as a student and seeing that I can reach out to the students in a way that others don’t, but I feel that my positions are completely in line with traditional residents of Provo," he said. "I would expect maybe after the shock of realizing that I’m 10 or 15 or 20 years younger than them, they would accept it and be excited to get behind my candidacy."

Johnson said his campaign should be interesting to anyone because of the things he is trying to do. For example, he is self-funding his campaign efforts, saying he is committed to not accepting any donations.

“I believe everyone should have one vote and one voice, and that’s hard to keep true to that when someone donates $10,000 to your campaign and someone else didn’t donate anything,” he said. “You’ll be more willing to listen to the person who donated, and I don’t believe that’s good politics. "

Johnson also said he will serve a maximum of two terms if elected because he believes in term limits, and he plans to explain every vote he casts on a legislative blog in an effort to be transparent.

I kind of think we make ideal candidates for political scenes and government jobs.

Running a campaign while attending school and working can be busy. He said often his team's meetings will start after 10 p.m. and last long into the night, but that it is worthwhile.

“I do feel that students are uniquely positioned to be able to do that — we have less family commitments than we will at any other time in our life and we sleep less," he said. "I kind of think we make ideal candidates for political scenes and government jobs."

He hopes more people from various backgrounds will run for office in the future to offer more representation for different groups in the legislature.

“I hope to see more non-professional politicians stepping up — I think moms should, more teachers should — I think we need to see the other people enter the political sphere rather than just your typical history, English or political science majors and law school graduates,” he said.