How to survive a nuclear blast

LIVERMORE, Calif. — For generations of schoolchildren, the mantra was “duck and cover” in case of a nuclear bomb explosion. Then there were the U.S. government-issued films with happy-clappy elevator instrumental background music instructing citizens to take cover in bomb shelters in buildings emblazoned with an orange “CD” sign on the outside.

While the official advice from the federal government is for people to “take shelter in the nearest and most protective building” to avoid the deadly fallout of radioactivity, a mathematical model developed by Michael Dillon, an atmospheric scientist at the Lawrence Livermore National Laboratory, suggests one must do a lot more to protect oneself in case of a nuclear attack. 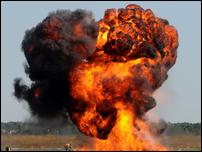 The anatomy of an explosion

Great balls of fire! It's a question that would definitely light a flame under the guys from "MythBusters" -- just how big of an explosion could the average Joe realistically survive?

During the height of the Cold War, scientists made attempts to detail the human health consequences of a nuclear explosion. But in analyzing the suggestions, Dillon felt there was gap in how human beings need to shelter themselves to survive an initial blast but close enough to face deadly fallout.

As a reference point, Dillion focused his study on “low yield detonation” on the level that destroyed Hiroshima and Nagasaki during World War II, since terrorists would most likely use those levels of weapons of mass destruction. He then worked with four variables to study which included exposure time to radiation outside, the precise timing of the initial blast (since radiation intensity decreases over time), the distance from the detonation and the amount of shielding a person has from radiation.

According to the results of his mathematical equations, to survive a low-yield nuclear blast, one can do better than just sheltering in place, but an individual still need a good knowledge of their surroundings and a watch that works. In a scenario that might save between 10,000 and 100,000 lives depending on the size of a city, according to his estimates, if one were to initially hunker down in a poorly shielded shelter but then escape to a high-quality shelter, it would have to happen within 30 minutes after the explosion.

"In a scenario that might save between 10,000 and 100,000 lives... if one were to initially hunker down in a poorly shielded shelter but then escape to a high-quality shelter, it would have to happen within 30 minutes after the explosion."

However, there are those who question Dillion’s findings. In an article published by the American Association for the Advancement of Science, an operations research scientist at Stanford University, Lawrence Wein, disputes Dillion’s findings.

“He fails to account for several important issues that are vitally important for policy recommendations,” Wein wrote.

He believes that no one heading into a ground zero situation has a realistic idea how long the transit time between shelters will really be, and still the best advice is for persons to follow the universally accepted standard “to shelter at least for twelve hours after a blast.”

To back up his claims, Wein uses the example that after the Three Mile Island, Penn., nuclear disaster in 1979, in spite of instructions for several thousand people to evacuate the immediate area, some 200,000 people took to the streets.

“The model is assuming that you have each person on puppet strings and can dictate their actions. This is simply not going to be the case in the aftermath,” Wein said. Paul Kruze is a San Diego-based professional, multiple award-winning multimedia journalist who has covered politics, multicultural and technology stories. He is also a professional musician. Email: paul@paulkruzelive.com