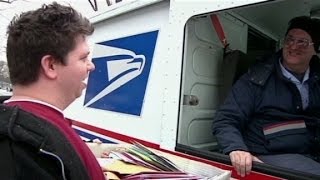 NEW YORK (CNN) — Not a hippopotamus. Not his two front teeth. All Elliot Shirback wanted for Christmas this year was cards.

It was a wish heard around the country.

A houseful of cards poured in for the 25-year-old New York man who has Down syndrome, according to his mother's Facebook pages. More than 1,800 have arrived, coming from nearly every state, CNN affiliate YNN reported.

It all started because of his mother, Anne Daggett.

Shirback was sad one day. She wanted to make him feel better so she asked what he wanted for Christmas.

"A hundred Christmas cards," he said, according to his mother's Facebook post. "I said it might be a little too late for that and people have much things on the plate," his mother wrote, "If anyone can send him a card He would love it!!!!!"

She included the address. Friends and family put the word out on Facebook and it exploded from there.

"I thought maybe he might get 35 cards at best. Next thing I know, it's like a flurry and gone viral," Daggett told CNN.

Their home is now covered in cards. One reads: "Elliot, you are loved."

"It makes me happy," he said. "It's like a gift, like somebody loves and cares about you."