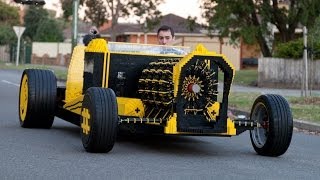 ROMANIA — Kids around the world received Legos for Christmas, but few can boast they made a working hot rod.

Raul Oaida, a 20-year-old from Romania, recently built a life-sized hot rod almost completely out of Legos. The car can reach speeds of up to 17 miles per hour — they were afraid to drive it faster for fear of a "Lego explosion."

The project took more than 500,000 Lego pieces to complete. The air-powered engine was made from standard Lego pieces and has four orbital engines with a total of 256 pistons, according to the website for The Super Awesome Micro Project.

A car with no emissions? The Dearman engine, powered by air, boasts just that.

Only the wheels and some other load bearing elements are not made out of Legos.

"I must point out that those seats are probably the most uncomfortable seats in automotive history," Australian partner Steve Sammartino told ABC. "But in order to stay pure to the project we wanted to make sure that all of the things, including the seats and the clunky steering wheel – which is also uncomfortable – were made out of Lego. "If you're going to do a project, you may as well really go the whole hog."

Sammartino funded the project with just a single tweet. The estimated cost was $25,000. The eco-friendly car was built in Romania and then shipped to a "super-secret" location in Melbourne, Australia.

The duo launched a Lego replica of a space shuttle into outer space in 2012.