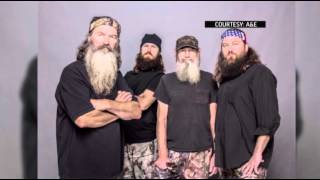 BATON ROUGE, La. (CNN) — In light of "Duck Dynasty" star Phil Robertson suspension from the show over anti-gay remarks, Republican Louisiana Gov. Bobby Jindal indicated media outlets have thrown out the First Amendment and the "politically correct crowd" is only concerned with viewpoints they agree with.

Former Alaska governor and 2012 GOP vice presidential nominee Sarah Palin also weighed in on TV reality star's forced leave from the series, writing in a post to her Facebook page that "Free speech is an endangered species."

"Those 'intolerants' hatin' and taking on the Duck Dynasty patriarch for voicing his personal opinion are taking on all of us," Palin, who met the series' cast while on a book tour in Louisiana, wrote on Facebook, along with a photo of her and the cast members.

The politically correct crowd is tolerant of all viewpoints, except those they disagree with.

"Duck Dynasty" is about a family-run duck call fabrication business in Louisiana. Robertson is the patriarch of the family. Season 5 is set to premiere on January 15.

Jindal — who is term-limited as governor and considering a 2016 GOP bid for the White House -- praised Robertson and his family as "great citizens of the State of Louisiana."

"The politically correct crowd is tolerant of all viewpoints, except those they disagree with," Jindal said in a statement.

Jindal goes on to say that while he doesn't agree with everything he reads or sees in the media, First Amendment rights to freedom of speech should be upheld consistently across popular culture.

"In fact, I remember when TV networks believed in the First Amendment," he said. "It is a messed up situation when Miley Cyrus gets a laugh, and Phil Robertson gets suspended."

A&E suspended Robertson after comments he made to GQ in their January issue of their magazine that homosexuality is a sin and puts it in the same category as bestiality and promiscuity. He also made controversial comments about race relations during his time growing up in the South.

Groups like NAACP and the Human Rights Campaign wrote a joint letter to the president of the network calling for the TV star to step down.

"We are extremely disappointed to have read Phil Robertson's comments in GQ, which are based on his own personal beliefs and are not reflected in the series Duck Dynasty," the network said in a statement Wednesday.

Robertson's suspension has prompted outrage among fans and calls for the network to bring the star back.

"Simply put, Phil Robertson is being censored and punished for quoting the Bible, and A&E's treatment of him is punitive and highly discriminatory, " said Faith Driven Consumer Founder Chris Stone.

The group tells CNN they have about 3,500 signatures on their petition and expect those numbers to rise.