VERNAL — Accused killer Jose Eduardo Leiva-Perez was read his Miranda rights before police questioned him, a judge said Tuesday, and investigators believed he voluntarily agreed to speak with them.

But questions remain about whether authorities coerced Leiva-Perez into implicating himself in the January beating death of his cousin, according to Judge Clark McClellan.

"As I sit here now, I think this is a close call," McClellan said from the bench Tuesday.

Leiva-Perez, 33, is charged in 8th District Court with murder, a first-degree felony. He also faces a third-degree felony witness tampering charge in a separate case.

The Guatemalan national, who speaks no English, has asked McClellan to toss out his statements to investigators, claiming language barriers and cultural differences kept him from fully understanding his decision to waive his Miranda rights.

Leiva-Perez also claims he only wrote a statement implicating himself in David Urrutia's death because police promised to help him if he told them what they wanted to hear, according to defense attorney Gregory Lamb.

During a Nov. 26 suppression hearing, Leiva-Perez testified that he told authorities Urrutia, 38, was severely injured when he found him inside the Fort Duchesne mobile home they were sharing in early January.

"When I got there, the accident had already occurred," Leiva-Perez testified with the help of an interpreter. "I told (investigators), but they didn't believe me."

Leiva-Perez has claimed that three men armed with baseball bats attacked his cousin. He also told a relative that Urrutia had been taken to an area hospital for treatment, according to court records. 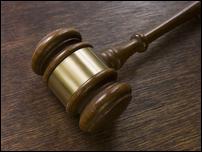 Man arrested in LA, charged with murder of cousin in Uintah County

A man accused of beating his cousin to death inside the Uintah County mobile home they shared has been arrested by federal agents in Southern California.

That relative called the sheriff's office Jan. 7 after she was unable to reach Urrutia for several days. A deputy assigned to check on the man's welfare found him dead inside the trailer home.

An autopsy determined Urrutia died after being struck three times in the head with a blunt object. It also showed Urrutia had no defensive wounds, was probably "lying on the couch/bed in the trailer" when he was attacked, and "would not have been aware that the assault was about to take place," court records state.

A U.S. Marshals task force arrested Leiva-Perez in California 10 days after Urrutia's body was discovered. He was returned to Utah, where he was questioned by a Uintah County sheriff's sergeant Leonard Issacson and an FBI agent who was asked to assist because he speaks Spanish.

McClellan said Tuesday that a plain reading of the transcript of the interrogation shows that a Miranda warning was given in Spanish at the outset of the interview.

"At least by a preponderance (of the evidence), I can determine that he was given the four required statements of Miranda, he acknowledged them and he gave a statement after them," the judge said.

Lamb, however, has argued that his client couldn't "knowingly and voluntarily" waive his rights, because he didn't fully understand what he was agreeing to give up.

Based on his own testimony, Leiva-Perez has a third-grade education and was raised in a rural part of Guatemala. He also testified that many people in his native country are fearful of the police and believe that officers abuse the uneducated and the poor.

McClellan acknowledged that Leiva-Perez's "demonstrably deficient public education" and the obvious language barrier may have limited his understanding of what police were asking him during his interrogation.

But the judge also found that Leiva-Perez did not have any "mental or emotional issues" at the time, was not subjected to lengthy questioning or otherwise put through undue stress.

Still, the judge raised questions about whether police made "threats or promises" that compelled Leiva-Perez to say things he wouldn't say otherwise. Investigators told Leiva-Perez he would face more severe punishment in the courts if he didn't "tell the truth," McClellan said, citing the transcript of the interrogation.

"Where there has been a threat of additional punishment if someone doesn't tell the story or the truth, the courts say generally, in most cases, that is coercive," McClellan said.

"I have to find that coercion causes the confession. I'm not sure there was coercion, and I don't know if there was causation," the judge added. "The cases you all find may help me to see how other courts have analyzed this."

McClellan did not decide Tuesday whether to suppress Leiva-Perez's statements to police. Instead, he set a Feb. 24 hearing for oral arguments on the remaining issues identified in his findings.

Leiva-Perez, who has been deported from the United States at least once before and was in the country illegally when Urrutia was killed, remains in the Uintah County Jail. He is being held without bail.