SALT LAKE CITY — When human rights icon Nelson Mandela died on Dec. 5, people around the world mourned his loss. On the day of his burial, many of those same people — including here in Utah — paid their final respects to one of the greatest civil rights and political giants of our time.

The Salt Lake branch of the NAACP held a memorial service Sunday in the Salt Lake City Main Library auditorium to pay tribute to the man who would become South Africa’s first black president. Many dignitaries, including Gov. Gary Herbert, Salt Lake City Mayor Ralph Becker, Salt Lake County Mayor Ben McAdams and others offered words of praise and admiration for the Nobel Prize laureate who led his country out of white minority rule after 27 years in a South African prison.

Jeanetta Williams, president of the local NAACP branch, recalled her personal meeting with Mandela at the White House.

“It was very humbling,” she said.

Williams was able to express to him personally her gratitude for his work to bring people together and “move forward.” She also spoke of her trip to South Africa where she visited many historic sites and experienced the culture of what she described as “the motherland.”

“It was very touching to me,” she said. “Going around South Africa and taking pictures of the historic sites.”

Most poignantly, Williams made mention of her experience of drinking water for the first time in Africa — saying it was the most satisfying drink she ever took. 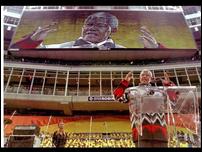 Nelson Mandela, who became one of the world's most beloved statesmen and a colossus of the 20th century when he emerged from 27 years in prison to negotiate an end to white minority rule in South Africa, has died. He was 95

“A lot of times I drink bottled water, but not this time in South Africa,” she said. “I wanted to taste the water from 'motherland.' It was the best tasting water I ever had.”

Born on July 18, 1918, Nelson Rolihlahla Mandela was the son of a tribal chief in Transkei, one of the future "Bantustans," independent republics set up by the apartheid regime to cement the separation of whites and blacks. Later on, as a sign of respect, many South Africans of all races would affectionately call him by his clan name, Madiba.

In 1964, he was convicted of treason and sentenced to life behind bars for leading a campaign of sabotage against the government, and sent to notorious Robben Island prison. The South African government made it illegal to quote him or publish his photo, yet he and other jailed members of his banned African National Congress were able to smuggle out messages of guidance to the anti-apartheid crusade.

As South Africa's first black president, the man who became a lawyer and who was also prisoner No. 46664 paved the way to racial reconciliation with well-chosen gestures of forgiveness. He lunched with the prosecutor who sent him to jail, sang the apartheid-era Afrikaans anthem at his inauguration, and traveled hundreds of miles to have tea with the widow of Hendrik Verwoerd, the prime minister at the time he was imprisoned.

His death closed the final chapter in South Africa's struggle to cast off apartheid, leaving the world with indelible memories of a man of astonishing grace and good humor. His regal bearing, graying hair and raspy voice made him instantly recognizable across the globe.

It was that spirited of forgiveness that was among the most respected traits for so many who admired him.

Nelson Mandela just epitomizes the servant leadership style through his humility. He was able to raise a country out of institutionalized racism and through forgiveness was able to lead South Africa into a leadership position within Africa.

“Nelson Mandela just epitomizes the servant leadership style through his humility,” said Justin Harnish of Salt Lake City. “He was able to raise a country out of institutionalized racism and through forgiveness was able to lead South Africa into a leadership position within Africa.”

“His beautiful smile and thoughtful prayer is what I get from him,” she said.

Nearby, another memorial service was held at the Cathedral Church of St. Mark to celebrate Mandela’s life. In attendance was the Rt. Rev. Carolyn Tanner Irish, former bishop of the Episcopal Diocese of Utah. She said though she never met Mandela, she was inspired by his work and dedication to helping transform his country.

“I knew this moment would come (that he would die),” she said. “It just kind of quickened my soul.”

She said Mandela will be remembered for his courage and strong sense of humanity.

Others echoed similar sentiments saying his life and impact will never be forgotten.

“We celebrate the life and legacy of a great man and truly a South African freedom fighter,” Williams said.