HIGHLAND — An elementary school fire that prompted an evacuation Thursday was caused by a fourth-grade boy who was playing with a lighter, district officials said.

Smoke filled Freedom Elementary School, 10326 N. 6800 West, Thursday morning and prompted the evacuation of 600 students. Six hundred more students were en route to the school, but their buses were turned around.

Fire officials reported that they were called around 8 a.m. and that the fire was extinguished by 8:30 a.m. The students were able to return to the school just after 9 a.m.

Friday, John Patten, assistant to the Alpine School District superintendent, confirmed that the issue was caused by a fourth-grade boy playing with a lighter. He said the boy first lit some foam rubber that was on a school stage on fire before igniting some toilet paper in a restroom.

"It didn't cause any damage to the school, but it did cause a lot of smoke," Patten said.

He said the wood on the stage was untouched and the only real cost will be paying for the fire extinguisher residue to be removed and for the stage's curtains to be cleaned and recovered in fire retardant. 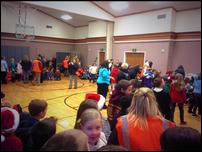 600 students evacuated due to fire

A fire at an elementary school Thursday morning sent students to a local church for shelter.

The student who started the fires was discovered after a student reported finding the burned toilet paper in the restroom and a teacher realized which student had gone to the restroom recently and began to question him. The boy was sent to the principal's office and his parents were called.

He apparently took the lighter from his older sister.

"The principal felt pretty comfortable that the young man didn't have a specific agenda in mind," Patten said. "He wasn't acting out in anger against teachers or administrators or fellow students; he didn't have intentions to burn the school down."

Patten said the student was suspended Thursday and Friday and will have a hearing Monday with school administrators to determine what further action, if any, will be taken.