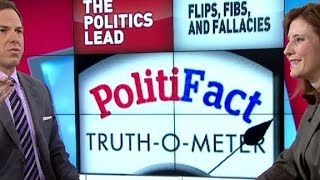 WASHINGTON (CNN) — It's the worst of the worst — the most fictional of statements, the flippiest of flops and most misleading of claims by U.S. political figures this year.

Fact checkers, Politifact, asked readers to rank the top lies from politicians in 2013. Here are the top four — all of which relate to President Barack Obama's Affordable Care Act:

Obama's repeated promise that if you like your health care plan, you can still keep it under the Affordable Care Act leads Politifact's list with 59% of voters picking it as top lie of the year.

But it was the President's revised pitch to the nation amid a storm of controversy over cancelled policies that earned Politifact's "pants on fire" emblem.

"What we said was — you could keep it, if it hasn't changed since the law passed," Obama said in November.

The original statement is partly accurate. The lie of the year is not the most strong statement &mdash; it's the most significant impact and then the excuse got the 'pants on fire' overall.

Politifact editor Angie Drobnic Holan told CNN's Jake Tapper in an interview that its team of fact check editors chose Obama's Obamacare statements because they had the most impact on the national debate.

"It's something we first flagged back in 2009. We said this is partly right — the health care law does leave in place the existing health care system but it's partly wrong because we knew back then not everybody would be able to keep their health care plan and this was the year that it was proved false as these cancellation letters when out again."

Drobnic said Politifact found 37 instances in which the President repeated that promise, without caveats.

"The original statement is partly accurate. The lie of the year is not the most strong statement — it's the most significant impact and then the excuse got the 'pants on fire' overall," she said.

In a speech in August, Cruz said President Barack Obama "granted all of Congress an exception" to Obamacare.

"Congress has to have insurance just like all other Americans; the law actually forced them out of the federal employees plan and on to the online market places so they could experience what it's like to shop with everyone else — so, not exempt."

"The Obama administration granted Congress the ability to keep federal health subsidies to purchase Obamacare exchange plans. That's an exemption from the law that private sector firms don't get."

Former Republican presidential candidate Rep. Michele Bachmann of Minnesota said in May appearing on Fox News that the IRS will be "in charge" of "a huge national database" on health care.

"The only role they play is if someone gets a subsidy to help them buy insurance, the IRS will verify their income and the IRS already has that information and they know how much money you're making."

Bachmann made similar claims about the IRS and its ties to the health care law in 2011 after Obama's State of the Union address.

The tea party darling asserted that "Instead of a leaner, smarter government, we bought a bureaucracy that tells us which light bulbs to buy, and which may put 16,500 IRS agents in charge of policing President Obama's health care bill."

At the time, CNN rated her claim misleading at best as the health care bill specifically says that taxpayers who do not buy insurance won't be prosecuted because of their failure to buy insurance through the law.

Coulter made the comments in a column titled "Democrats to America: We Own the Government!" posted to her website in October.

"Experts told us this was ridiculous and nothing we could find in the law connected where doctors were trained with what kind of insurance you had," Drobnic said.

Experts, Politifact says, called the notion that there is a provision in the Affordable Care Act that bars doctors from accepting patients who bought insurance under the federal marketplace "ridiculous" and "outrageous."

CNN reached out to the people mentioned above for comment. Cruz's office was the only one to reply by the time the Lead aired at 4 p.m. ET.