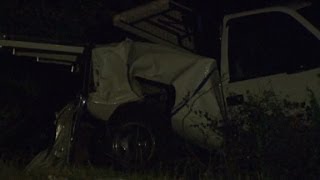 HOUSTON (AP) - "Affluenza," the affliction cited by a psychologist to argue that a North Texas teenager from a wealthy family should not be sent to prison for killing four pedestrians while driving drunk, is not a recognized diagnosis and should not be used to justify bad behavior, experts said Thursday.

A judge's decision to give 16-year-old Ethan Couch 10 years of probation for the fatal accident sparked outrage from relatives of those killed and has led to questions about the defense strategy. A psychologist testified in Couch's trial in a Fort Worth juvenile court that as a result of "affluenza," the boy should not receive the maximum 20-year prison sentence prosecutors were seeking.

The term "affluenza" was popularized in the late 1990s by Jessie O'Neill, the granddaughter of a past president of General Motors, when she wrote the book "The Golden Ghetto: The Psychology of Affluence." It's since been used to describe a condition in which children _ generally from richer families _ have a sense of entitlement, are irresponsible, make excuses for poor behavior, and sometimes dabble in drugs and alcohol, explained Dr. Gary Buffone, a Jacksonville, Fla., psychologist who does family wealth advising.

But Buffone said in a telephone interview Thursday that the term wasn't meant to be used as a defense in a criminal trial or to justify such behavior.

"The simple term would be spoiled brat," he said.

"Essentially what he (the judge) has done is slapped this child on the wrist for what is obviously a very serious offense which he would be responsible for in any other situation," Buffone said. "The defense is laughable, the disposition is horrifying ... not only haven't the parents set any consequences, but it's being reinforced by the judge's actions."

District Judge Jean Boyd issued his sentence Tuesday after Couch "admitted his guilt" last week in four cases of intoxication manslaughter in the June accident, according to a news release from the Tarrant County prosecutor's office. The ruling came after the judge heard three days of testimony from witnesses, victims' loved ones, investigators and treatment experts.

The psychologist who testified as a defense witness at Couch's trial said the boy grew up in a house where the parents were preoccupied with arguments that led to a divorce, the Fort Worth Star-Telegram reported.

But prosecutor Richard Alpert argued in court that if the boy continues to be cushioned by his family's wealth, another tragedy is inevitable.

A message left for Boyd by The Associated Press was not returned Thursday. The Star-Telegram reported that the judge said the programs available in the Texas juvenile justice system may not provide the intensive therapy Couch needs. His parents had said they would pay for him to go to a $450,000-a-year rehabilitation center near Newport Beach, Calif.

Although Couch's case was handled in juvenile court, he has been identified publicly by the Tarrant County Sheriff's Office.

One legal expert said he had never even heard of "affluenza."

"The concept that I did something because I'm rich and spoiled doesn't look like a good causation," Richard Segura, a supervising attorney at the University of Texas at Austin's Criminal Defense Clinic, told the AP. "It doesn't sound like something that would ameliorate the punishment."

On the other hand, he said, the defense attorney would have likely looked at all the facts in the case and tailored them in a way that he thought would best influence the judge's decision. In addition, the judge likely factored in rehabilitation, restitution and other factors when sentencing Couch, Segura said.

Dr. Suniya Luthar, a psychologist who specializes in the costs of affluence in suburban communities, said her research at Columbia University in New York has shown that 20 percent of upper middle-class adolescents believe their parents would help them get out of a sticky situation at school, such as being caught for the third time on campus with a bottle of vodka. Boyd's sentence reinforces that belief.

"What is the likelihood if this was an African-American, inner-city kid that grew up in a violent neighborhood to a single mother who is addicted to crack and he was caught two or three times ... what is the likelihood that the judge would excuse his behavior and let him off because of how he was raised?" Luthar asked.

"We are setting a double standard for the rich and poor," she added, noting the message is "families that have money, you can drink and drive. This is a very, very dangerous thing we're telling our children."

Authorities said the teen and friends were seen on surveillance video stealing two cases of beer from a store. He had seven passengers in his Ford F-350, was speeding and had a blood-alcohol level three times the legal limit, according to trial testimony. His truck slammed into the four pedestrians, killing Brian Jennings, 43, Breanna Mitchell, 24, Shelby Boyles, 21, and her mother, Hollie Boyles, 52.

Scott Brown, Couch's lead defense attorney, said the teenager could have been freed after two years if he had drawn the 20-year sentence. Instead, the judge "fashioned a sentence that could have him under the thumb of the justice system for the next 10 years," he told the Star-Telegram.