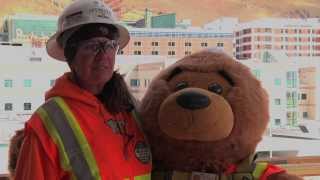 SALT LAKE CITY — He’s big, soft and cuddly and always has a smile on his face.

He’s a member of a construction crew that is making quite an impression on the kids across the street at Primary Children’s Hospital.

This giant stuffed bear is part of the crew at the Eccles Outpatient Services Building, which is across the street from the hospital. Children in the cancer and intensive care units can see the building through their windows. So a few months ago, someone suggested taking a giant stuffed bear, which had been in the front lobby for several years, and give it to the Jacobsen Construction crews to have some fun.

“He’s been on ladders, in the forklift, on scissor lifts in the window, on the climbers, on the crane,” said Liz Brown, a rigger for Jacobsen Construction. “He’s been everywhere.”

It’s the responsibility of the other crew members to make sure this big bear, with a hard hat and construction vest, is moved every day.

“If you’re a child or a parent of a child in the hospital, you can’t imagine how difficult it is,” Tony Smith, a certified child life specialist at Primary Children’s Hospital said. “But if you have a child here day in and day out, sometimes fighting for life itself, to find some little thing to make it less of a hospital and more of a home, more fun, to put that child first, it eases, it makes it easier for them to be in the hospital.”

There are about 60 rooms at Primary Children’s Hospital that face the building under construction, and the kids know to look for the bear.

“Each day, the kids try to find it, and we give them a map, a picture of the building, and each day they track the location in a different place, and they get a sticker that says, “I found Boo Boo today or something like that,” Smith said. “The kids who have been here a while, have been tracking him for weeks.”

Spider-Man not only climbs up buildings and saves damsels in distress, but he also washed windows at the Primary Children's Hospital Thursday afternoon.

It’s those small things that make a big difference in the lives of children; children like Alice Fish, who was born without an immune system, and requires chemotherapy and a bone marrow transplant.

“Really the first thing she does when she wakes up is, ‘Dad, where’s the bear?’ She’ll ask me, ‘Where’s the bear?’ her father, Tyler Fish, said. “And we’ll try to piece together where the bear is and she gets pretty excited about that, and it makes a big difference.”

The family was given the option to move to a bigger room, but Alice said no because she wouldn’t be able to see the bear.

It’s fun for the kids and the construction crew as well.

“It's been fun to watch how inventive they get in displaying the bear, and where they put it, and the efforts they go to,” Bryan Mutz, Jacobsen Construction supervisor said.

Because the work these crews are doing involves more than just putting up a six-story building.

“It's such a privilege to be on this job site because of the kids and the happiness that's it's brought us.” Brown said. “I mean, who wouldn't want to be a part of making a child smile?”

The new building will be completed late next year, but what will happen to Boo Boo then?

“This is his home,” Brown said. “He won't be going anywhere with us I'm sure. We'll find a spot for him.”

A spot where children can see him.