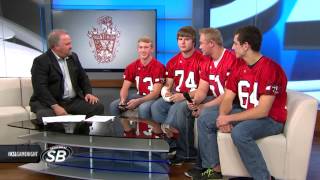 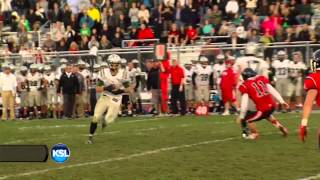 SALT LAKE CITY — The year 2013 was a year to remember for Utah high school football.

Who could forget the double hook and lateral Olympus used to knock off Springville at the end of a first round playoff game.

Roy experienced a miracle win after teammate Baby Tee Eteuati lost his mother to an illness. Justin Weaver caught a hail mary pass with no time left against Fremont giving the Royals an incredible victory.

There was the extra point kicked by Riverton's Cody Taylor that inspired many with disabilities to never give up on their dreams.

These were just a sample of the great moments of the past season. We had the tough task of choosing a player of the year, coach of the year and MVP from each classification. These were honored in a special Game Night Live that you can watch above. Four of the award winners were only juniors and will return next season.

Player of the Year

The Wisconsin commit had one of the best seasons in state history. His 2,465 yards places him third all-time in Utah for rushing yards in a season. He scored 31 touchdowns and averaged 12.6 yards per carry, leading East to a Region 6 title, 13-1 record and an appearance in the 4A state championship game.

Masina is just a junior but didn't play like one. He rushed for 1,643 yards and 25 touchdowns. He was also a star defensively at linebacker making 87 tackles and 4.5 sacks. He was the first junior captain in Brighton history and helped the Bengals reach the 5A state championship game for the first time since 2005. He is ranked by ESPN as the 126th best player in the class of 2015 and has 11 offers, including Michigan, Arizona State, Stanford, Wisconsin, Oklahoma and the in-state schools.

Covey wasn't the starter for Timpview at the beginning of the season but quickly made up for lost time. The junior completed 70 percent of his passes for 1,890 yards, 26 touchdowns and just six interceptions. He also rushed for 1,264 yards and 18 touchdowns, and returned two kickoffs for scores and caught three touchdown passes. He led the Thunderbirds to a stunning upset of No. 1 East in the 4A state championship game, giving Timpview back-to-back state titles.

Defense was the key to Desert Hills' first state title. And the best player on their defense was Gabriel Sewell. He did it all for the Thunder starting games at multiple positions, including running back, offensive line, linebacker and defensive back. He had 51 tackles, three sacks and an interception. He also blocked field goals and extra point attempts. He will be back for his senior season to help the Thunder defend their title.

Fowles rushed for a 3A best 1,479 yards and 23 touchdowns, helping Manti make a successful transition from 2A to 3A. He rushed for 411 yards in a game against Juab, which places him fourth in state history for rushing yards in a game. He was also a star on defense, racking up 118 tackles and a sack. Fowles played an important role in helping Manti reach the 3A state championship game, their third consecutive championship appearance.

Averett was a force on both sides of the ball for the Wildcats. He led 2A in rushing with 1,404 yards and 20 touchdowns and averaged 8.4 yards per carry. He also stood out on defense, leading the team in tackles with 106 while adding a sack and interception. He joined forces with a dominant offensive line to lead the Wildcats to their first state title since 1988.

Roberts was the leader of a Duchesne team that once again finished with a perfect record and state championship. He was responsible for 23 touchdowns on offense and led the team with 93 tackles and three interceptions on defense. He shared a tackle in the state championship game that turned out to be the game-winning play. The Eagles now have a state record 47-game winning streak and a fourth consecutive state title.

Coach of the Year

Bingham entered the season as the favorite to win the 5A state championship. Despite the enormous pressure, the Miners managed to not only win the title but exceeded expectations along the way. Peck decided to go with a junior quarterback Kyle Gearig who had no varsity experience before the season. The decision paid off as Gearig passed for 1,876 yard and 28 touchdowns and rushed for 730 yards and 13 touchdowns.

Bingham went 14-0 and beat every Utah team they faced by 11 points or more, including a 38-13 win over Brighton in the 5A championship game. They also went on the road and defeated Colorado 5A powerhouse Valor Christian, who went on to win their 5th straight state title. Peck has now led Bingham to four state championships since 2006.