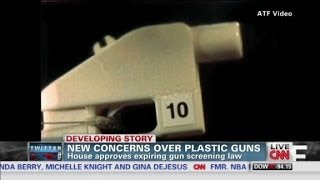 House extends gun law, but is it enough?

WASHINGTON (CNN) &38212; House lawmakers on Tuesday are expected to approve a 10-year extension of a federal law requiring that all guns be detectable by metal screening machines.

But partisan wrangling could still mean the Undetectable Firearms Act will expire next Monday.

The 1988 law prohibits guns that don't contain enough metal to trigger screening machines commonly found in airports, courthouses and other secure areas accessible to the public.

It has become an issue with the advent of 3-D printers, which the Bureau of Alcohol, Tobacco, Firearms and Explosives recently said its tests showed are capable of producing lethal firearms entirely made of plastic.

A one-sentence bill by Rep. Howard Coble, R-North Carolina, is expected to pass the House on Tuesday.

But the White House and congressional Democrats want the extension to also deal with potential loopholes for 3-D-printed guns.

That has led to worries that plastic guns could pass through metal detectors without being flagged by simply removing the block, which isn't required for a 3-D-printed gun to operate.

The House bill is better than nothing, but it's not good enough. We absolutely must close the loophole that allows anyone to legally make a gun that could be rendered invisible by the easy removal of its metal part.

Plastic components have become common in popular guns, but commercial manufacturers often use metal as a permanent part of the gun to comply with the law.

Proposals to extend the law have languished for months in the House and Senate. The Obama administration and congressional Democrats want an extension to also take into account the new technology, by making all guns be required to contain metal in the functioning parts of the firearm.

The White House hasn't publicly taken a position on the Coble bill.

Sen. Charles Schumer, D-New York, is sponsoring a one-year extension of the law, arguing it would give lawmakers time to come up with a new measure that would tighten the rules to require metal parts in guns.

In anticipation of the expected House passage of Rep. Coble's extension, Schumer said Monday that he'll try to get his bill passed next week.

"The House bill is better than nothing, but it's not good enough," Schumer said. "We absolutely must close the loophole that allows anyone to legally make a gun that could be rendered invisible by the easy removal of its metal part. Under current law, it is legal to make a plastic gun so long as it has some metal in it, even if it is easily removable. The bill we'll try to pass in the Senate would fix that."

Republicans say Democrats are refusing to work with them to pass a longer-term extension of the law.

"It doesn't meet the common-sense test to only reauthorize an extension of the Undetectable Firearms Act for a short year," Grassley said.

With the Senate out on a break and not returning to work until December 9, the day the current law expires, it remains unlikely legislation will be ready to take its place.

Under House rules, Coble's bill cannot be amended, and will require two-thirds support to pass. The bill is likely to garner significant Democratic support. With the law expiring soon, passage of the House bill will increase pressure on Senate Democrats to do the same.