6PM: The reason behind the Black Friday frenzy 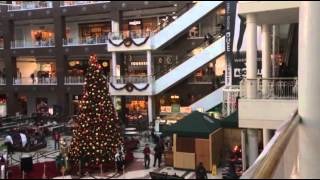 (AP) - The holiday shopping season started as a marathon, not a sprint.

More than a dozen major U.S. retailers stayed open for 24 hours or more on Thanksgiving Day through Black Friday, and crowds formed early and often over the two days.

About 15,000 people waited for the flagship Macy's in New York to open at 8 p.m. on Thanksgiving. Long checkout lines formed at the Target in Colma, Calif., on Friday morning. And by the time Jessica Astalos was leaving North Point Mall in Alpharetta, Ga., after a six-hour buying binge that started on Thanksgiving, another wave of shoppers was coming in about 5:30 a.m. on Friday.

This year may cement the transformation of the start of the holiday shopping season into a two-day affair.

Black Friday, the official start of the shopping season between Thanksgiving and Christmas, originally was named that because it was when retailers turned a profit, or moved out of the red and into the black. Retailers opened early and offered deep discounts.

But in the past few years, store chains have been opening on Thanksgiving.

This year, several welcomed shoppers for the first time on Thanksgiving night, while Gap Inc., which owns Banana Republic, Gap and Old Navy, opened half its stores earlier on the holiday.

Wal-Mart stores, most of which stay open 24 hours, has for the past several years offered doorbusters that had been reserved for Black Friday. And Kmart planned to stay open 41 hours starting at 6 a.m. on Thanksgiving.

That has led some to question how much further Black Friday will creep into Thanksgiving, which along with Christmas is one of only two days a year that most stores are closed.

The earlier openings have met with some resistance.

Workers' rights groups and some shoppers had planned protests on Thanksgiving and Black Friday to decry the way some store employees were forced to miss holiday meals at home. But as of Thursday afternoon, there were no reports of widespread protests.

Judy Espey ducked out of a Thanksgiving family dinner to buy a 50-inch flat-screen TV at Wal-Mart near Clifton Park, N.Y., for $288. But "I don't really dig the Thanksgiving night thing," she confessed. "I feel bad for the workers."

Vinnie Gopalakrishnan pledged not to hit the stores after seeing TV footage of people shopping on Thanksgiving. But he flip-flopped after his cousin told him about a deal on a big-screen TV.

"I said, `I'm not going to do it. Those people are crazy,'" Gopalakrishnan said before heading to a Wal-Mart on Friday.

It's unclear whether the early openings will lead shoppers to spend more over the two days or simply spread sales out.

Last year, sales on Thanksgiving rose 55 percent from the previous year to $810 million, as more stores opened on the holiday, according to research firm ShopperTrak. But sales dropped 1.8 percent to $11.2 billion on Black Friday, though it still was the biggest shopping day last year.

IBM Benchmark, which tracks e-commerce for 800 retailers, said online sales on Thanksgiving were up 19.7 percent from last year. Online sales on Black Friday rose 9 percent, based on preliminary data.

There are signs that stores fared well, too.

Terry Lundgren, Macy's CEO, said the 15,000 people who showed up for the opening of the flagship store was the most ever, up from 11,000 last year. "Clearly people are in the shopping mood," he said.

Of course, not every retailer saw robust crowds.

At Woodland Hills mall in Tulsa, Okla., the owner of Bags and Bangle complained that he had to stay open from 8 p.m. on Thanksgiving to 10 p.m. on Friday. Suhail Zaidi, who was required by the mall to keep his booth open, said Thanksgiving was somewhat busy, but business had died down by 3 a.m. On Friday morning, he said he had seen only about 20 customers.

"We ruined the holiday," Zaidi said. "Black Friday is a good shopping day, but opening up on Thanksgiving is ridiculous."