Woman OK after being trampled at Clinton Wal-Mart

630AM: Woman trampled at Clinton Walmart 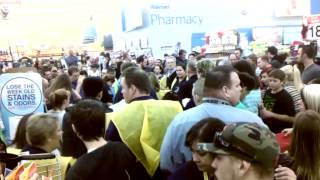 CLINTON — A woman is OK after being trampled by the crowd at Wal-Mart Thursday night in Clinton. Police said it was all over cheap tablets.

Wal-Mart employees had just brought out a pallet of tablets at the appointed "sales event" time of 8 p.m.

They cut the plastic off and the crowd surged forward, knocking over a woman and stepping on her.

"There was a crowd of approximately 100 to 150 people around the items. As soon as it hit the 8 o'clock sale, they started pushing and shoving and pushing over each other and just trampling on people," said Lt. Dave Valentine with the Clinton Police Department.

Police that had been asked previously to be on hand backed up the crowd and helped the woman up.

She was taken to a back room to be checked out but police said she should be fine. No one will be cited.

The Standard Examiner reports the crowd was swarming to get a tablet on sale for $49.

The holiday shopping season kicked off early, as several retailers began offering deals on Thanksgiving Day. Many people complained about the early start and the mad rush for deals &ndash; but they went out shopping anyway. There were scattered reports of fights and other problems.

Nationwide, other shoppers are focusing on discipline and self-control. A woman at a Target near Chicago says she's trying to stay to her list, which includes clothes for her teenage daughter and glasses for her sister. But Mindy Snow says, "So many cute things I keep seeing for myself."

Some shoppers tried again Friday, after deciding that they didn't want to deal with long lines outside stores on Thanksgiving.

A New Jersey man says he was at Wal-Mart Thursday night, hoping to get an iPad Mini, but gave up when he saw the long line. He was back Friday morning, this time hoping to score a deal for an iPhone, which came with a $75 gift card.