Starting Jan. 1, DSU will ban all tobacco products — cigarettes, chew, hookah and electronic cigarettes — from its campus, including university-operated buildings and outdoor spaces, university-owned and operated vehicles and in private vehicles on campus. The policy, started by student senators, was signed into effect last week.

The idea for the ban began four years ago when student senators traveled to Oregon. While there, they visited a tobacco-free campus and thought Dixie may benefit from a similar policy. Since that time, Joe Pate and Jim Seely, former student health science senators and now nurses, took the idea and turned it into a policy to benefit the health of the campus, Seely said.

“It’s a student initiative about health. There are a lot of questions whether this was about rights, because it’s Utah and it was religious based, but it always came down to the fact that this is about health,” Seely said. “Joe and I are both nurses and we both believe in health and healthcare.” 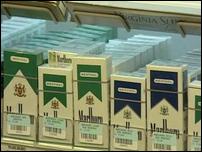 Two Utah lawmakers want to raise the legal age to buy tobacco from 19 to 21, which would match the minimum age for drinking alcohol.

Before the policy was put to paper, the senators began researching precedence for tobacco-free campuses, health risks associated with tobacco and opinion on their own campus. Currently, nearly 1,200 university and college campuses are tobacco free, according to DSU.

Three years ago, with a stash of popsicles and pieces of paper asking student to “check ‘yes’ or ‘no’” for a tobacco-free campus, Pate began the early stages of researching opinion. He and Seely then administered professionally designed surveys to students, knocked on more than 1,500 doors, held six forums and created an online forum to collect opinion. From there, they wrote a proposal policy based on their findings, presenting it to faculty and administration.

Overwhelmingly, students wanted a tobacco-free campus, Seely said. Though there was a small percentage of the populace who fought the policy based on a “right to smoke,” the precedence and evidence of health risks trounced the objections.

“Our answer to (objections) is that this has already been brought to the Supreme Court. There has already been someone who felt like it was their right to smoke on a different campus (with a tobacco ban),” Seely said. “The Supreme Court ruled that smokers are not a recognized protected class of people. It’s not a minority group. You do not have a right to smoke on campus. ...What is not OK is smoking around a large group of people in a public institution where people come together to learn in a large community.”

Friday, the board of trustees signed the policy, banning all tobacco products, except products “containing or delivering nicotine or substances designed to mimic nicotine that have been approved by the U.S. Food & Drug Administration for use in treating tobacco dependency,” the policy reads.

“I didn’t necessarily start off believing in this,” Seely said. “But I 100 percent believe in this now because of the research and the evidence.”