WASHINGTON — President Barack Obama reiterated his "strong commitment" to pass an immigration reform bill this year in a meeting with a diverse group of faith leaders Friday.

President Dieter F. Uchtdorf, second counselor in the First Presidency of The Church of Jesus Christ of Latter-day Saints, was one of 15 faith leaders invited to meet with the president. The meeting lasted approximately an hour, where Obama told the faith leaders he hoped to see a bill on immigration reform in the next 60 days.

"The President thanked the leader for their support and reiterated his strong commitment to working with Congress in a bipartisan manner so that they can swiftly pass and send a commonsense immigration reform bill to his desk," the White House said in a released statement."

The president discussed his plans for immigration reform, which include a pathway for illegal immigrants to earn citizenship, a hard stance on employers who exploit immigrant workers, a strengthening of the legal immigration system and an increased effort to strengthen border security.

"The President and the leaders agreed that the diversity of faith communities represented around the table was indicative of the growing consensus across America in support of fixing the broken immigration system," the White House said.

Participants in the meeting:

Since winning reelection in Nov. 2012, the Obama administration has made the issue of immigration reform one of its top priorities during his second term. Addressing the subject in his State of the Union address in February, Obama talked about the need for "real reform" in immigration policies put forth.

"Real reform means strong border security. … Real reform means establishing a responsible pathway to earned citizenship — a path that included passing a background check, paying taxes and a meaningful penalty, learning English, and going to the back of the line behind the folks trying to come here legally," Obama said.

"And real reform means fixing the legal immigration system to cut waiting periods, reduce bureaucracy and attract the highly-skilled entrepreneurs and engineers that will help creat jobs and grow the economy," he added.

Following Friday's meeting, Tony Yapias, former director of Hispanic Affairs for the state of Utah, said he was encouraged that Pres. Uchtdorf met with Pres. Obama to discuss the needs of immigration reform.

"Today's meeting at the White House that included a representative of the First Presidency of The Church of Jesus Christ of Latter-day Saints shows how important this issue is for members of the LDS faith," Yapias said in a statement. "This is the first time a member of the First Presidency has met with President Obama to talk about immigration. My hope is that members of the LDS faith will become more supportive of a comprehensive immigration reform."

The Utah Democratic Party, too, applauded the efforts of Pres. Uchtdorf to work with Pres. Obama on a solution to immigration reform.

"The Utah Democratic Party applauds both President Obama and President Uchtdorf; this is a pivotal moment on the road to immigration reform," said Sen. Jim Dabakis, Utah Democratic Party chairman. "We look forward to continued discussions as we all work towards humane and compassionate reform of our broken immigration system. We are pleased to join the LDS Church, long a staunch advocate for our immigrant brothers and sisters, in this fight." 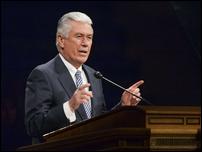 President Dieter F. Uchtdorf, Second Counselor in the First Presidency of The Church of Jesus Christ of Latter-day Saints, joined 13 other faith leaders from around the United States Friday morning for a special meeting in the White House called by President Barack Obama to talk about immigration.

"What to do with the estimated 12 million undocumented immigrants now residing in various states within the United States is the biggest challenge in the immigration debate," the statement says. "The bedrock moral issue for The Church of Jesus Christ of Latter-day Saints is how we treat each other as children of God.

The church added that it was "concerned" with any state legislation that only contains enforcement provisions, and that that type of legislation would likely "fall short of the high moral standard of treating each other as children of God."

"The Church supports an approach where undocumented immigrants are allowed to square themselves with the law and continue to work without this necessarily leading to citizenship," the statement continues. "In furtherance of needed immigration reform in the United States, The Church of Jesus Christ of Latter-day Saints supports a balanced and civil approach to a challenging problem, fully consistent with its tradition of compassion, its relevance for family, and its commitment to law."

Today's meeting at the White House that included a representative of the First Presidency of The Church of Jesus Christ of Latter-day Saints shows how important this issue is for members of the LDS faith. This is the first time a member of the First Presidency has met with President Obama to talk about immigration. My hope is that members of the LDS faith will become more supportive of a comprehensive immigration reform.

The LDS Church supported the principles of the Utah Compact in Nov. 2010, which described five principles that should guide Utah's immigration discussion. The Utah Compact put emphasis on federal solutions, law enforcement, families, the economy and a free society.

"The Church regards the declaration of the Utah Compact as a responsible approach to the urgent challenge of immigration reform. It is consistent with important principles for which we stand."

In January, a bipartisan "Gang of Eight" senators pushing for immigration reform announced their intentions to address immigration reform this summer. The immigration proposal was expected to provide a path to citizenship for an estimated 11 million people in the U.S. illegally.

Sen. Mike Lee, R-Utah, pushed back on the bipartisan proposal, saying the legislation would grant "special benefits to illegal immigrants."

"We all support enhanced border security, stronger visa enforcement, effective employment verification measures, and humane treatment of those lacking legal status," Lee said in a statement. "I believe the overwhelming majority of Congress could work together to enact significant and lasting reforms, particularly to strengthen border security and fix our legal immigration system."