Krista Miller served as a state proctor parent for the past seven years. She worked with an agency contracted through the Division of Child and Family Services. DCFS spokeswoman, Elizabeth Sollis, said that proctor agencies are required to give background screenings to proctor parents every year.

While working with the agency, Millcreek Child and Family Services, DCFS records show Miller had a two year period where she didn't receive a screening.

"If a background check wasn't done, that would be something that wasn't in compliance with their contract," Sollis said. 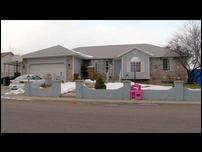 Two women have been arrested for alleged ongoing abuse against a teenage boy after police say they duct taped him, forced drugs on him and poured Tabasco sauce in his eyes.

According to Utah Adoption Exchange Director, Kathy Searle, the regulations for a foster parent are quite strict. Typically the kids in proctor care need special attention. The compensation for these parents is also significantly more than traditional foster care.

"They do recruit families more so as this is your job, you're a professional parent," Searle said. "You're going to be trained at a higher level."

There is no indication if Miller abused any of the children in her care as a foster parent. Her mother insisted that she loved the children and took good care of them.

"She loved these kids so much," said Marsha Christensen, Miller's mother. "She still can't talk about them when they're gone. They always had good clothes. They had baths every night, meals every night."

West Valley City Police said the investigation is still ongoing, and they would not comment on whether they are looking into other cases of abuse involving Miller.