SALT LAKE CITY — The Samoan islands are lush and tropical, a place where one can relax and feel the pacific breeze. Travel 1800 miles down below the surface of the islands, though, and there's trouble brewing of explosive proportions.

A University of Utah researcher said that he's found the collision site of two continent-size "piles" of rock below the islands, and in a couple hundred million years, the area will be ready to blow.

"This is the type of mechanism that may generate massive plume eruptions, but on the timescale of 100 million to 200 million years from now," said seismologist Michael Thorne. "So don't cancel your cruises."

Thorne is lead author of a study that will appear in the latest issue of the journal Earth and Planetary Science Letters. He's done more computer simulations and amassed the largest set of data ever compiled to model the border between the Earth's core and the mantle just above. 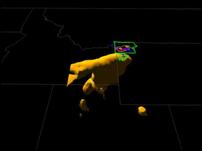 New studies of the plumbing that feeds the Yellowstone supervolcano in Wyoming's Yellowstone National Park shows the plume and the magma chamber under the volcano are larger than first thought and contradicts claims that only shallow hot rock exists.

What does all that mean? It indicates that the mantle at that area is largely molten, so seismic waves travel through the area slower, hence "low velocity." But molten means hot, which means that the area has the potential to become very active in the future, much like Yellowstone Park currently is. Large enough to cause serious ecological devastation.

"These very large, massive eruptions may be tied to some extinction events," Thorne said.

The study is also the first to use seismic evidence to show that there are "piles" in the mantle that move atop the Earth's deep core, much like tectonic plates float on the mantle.

"They are sitting atop the core and getting pushed around by overlying mantle forces like subduction," he said. "They move around on the core somewhat like continental plates drift at Earth's surface."

The study was also conducted by Allen McNamara and Edward Garnero of Arizona State University, and Gunnar Jahnke and Heiner Igel of the University of Munich.