FORT DUCHESNE, Uintah County — A Utah woman who was sentenced to serve 19 years in prison for torturing her grandsons has died behind bars.

Charlissa Sireech died Jan. 20 at Federal Medical Center Carswell near Fort Worth, Texas, according to Bureau of Prisons spokesman Chris Burke. She was 53 and had a history of health problems that predated her incarceration.

FMC Carswell is the only medical facility for women in the federal prison system. It provides specialized services for inmates with serious or chronic health problems.

Dr. Roger Metcalf, a spokesman for the Tarrant County Medical Examiner's Office in Texas, said the agency did not perform an autopsy on Sireech, most likely because she would have been under a doctor's care at the time of her death.

In August 2004, Sireech was awarded custody of three of her grandchildren after the Indian Child Welfare Act coordinator for the Ute Indian Tribe convinced a California judge to turn the children over to the tribe. 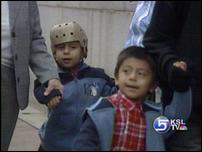 Minnie Grant told the judge that Emilio, Jose and Mona Rodriguez were eligible for enrollment as Utes. However, the tribe's high blood-quantum requirement made it impossible for the siblings, who are part Hispanic, to become tribal members.

The children had been living with their paternal grandparents in Palmdale, Calif., before Grant's intervention. They were brought to the Uintah-Ouray Indian Reservation and placed with Sireech, who had a documented history of violence and alcohol abuse.

Three weeks later, Jose Rodriguez, who was 3 years old at the time, was rushed to Uintah Basin Medical Center in Roosevelt. He was unconscious after suffering repeated blows to his head. Four-year-old Emilio Rodriguez was spotted in the hospital's waiting room by a nurse. He had "raccoon eyes," the unmistakable sign of a basal skull fracture.

Hospital staff discovered burn marks and bruises covering both boys' bodies, including their genitals and buttocks. Investigators would later learn that Sireech had held the boys' heads underwater "until bubbles came out," used a scalding curling iron to "move" them, and slammed them headfirst onto the floor.

The abuse was Sireech's way of punishing the boys for speaking Spanish, authorities said.

Sireech pleaded guilty in federal court to seven counts of assault. At her sentencing hearing in December 2005, she blamed her behavior on her poor health and reliance on medication.

Jose Rodriguez was not expected to live initially but regained consciousness. He is partially paralyzed and suffered permanent brain damage. All three children are plagued by "anxiety, mental distress, fear, pain, suffering and apprehension," according to a $50 million lawsuit filed by their paternal grandparents against the federal government, the Ute Tribe and Grant.

The lawsuit was settled for $1 million.

Burke, the Bureau of Prisons spokesman, did not have any information about the cause of Sireech's death. She was scheduled to be released from prison in May 2024, he said.

Sireech was buried Monday in the Fort Duchesne Cemetery.