A-Rod Likely To Be Suspended Monday 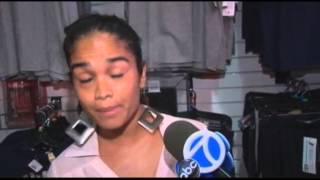 NEW YORK (AP) - Defiant till the end, Alex Rodriguez is intent on evading baseball's most sweeping punishment since the Black Sox scandal.

The harshest penalty was reserved for Rodriguez, the New York Yankees slugger, a three-time Most Valuable Player and baseball's highest-paid star. He said he will appeal his suspension, which covers 211 games, by Thursday's deadline. And since arbitrator Fredric Horowitz isn't expected to rule until November or December at the earliest, Rodriguez was free to make his season debut Monday night and play the rest of this year.

Sidelined since hip surgery in January, Rodriguez rejoined the Yankees five hours after the suspension in a series opener at the Chicago White Sox, playing third base and batting fourth.

"The last seven months has been a nightmare, has been probably the worst time of my life for sure," Rodriguez said before the game.

Booed loudly each time he walked to the plate, Rodriguez went 1 for 4 in New York's 8-1 loss. He blooped a single to left field in the second inning, flied out in the fourth and sixth, then struck out in the eighth. He acknowledged he felt rusty in the field, though he made all his plays.

"It was fun to go out there and play the game again," Rodriguez said. "I love the fans here."

The other 12 players agreed to their 50-game penalties, giving them a chance to return for the playoffs.

Ryan Braun's 65-game suspension last month and previous penalties bring to 18 the total number of players sanctioned for their connection with Biogenesis.

At the center of it all was Rodriguez, once the greatest player of his time, reduced Monday night to saying that he was humbled, at 38, just to "have the opportunity to put on this uniform again" and adding if he didn't fight for his career, no one else would.

A-Rod's drug penalty was for "his use and possession of numerous forms of prohibited performance-enhancing substances, including testosterone and human growth hormone over the course of multiple years," MLB said.

His punishment under the labor contract was "for attempting to cover up his violations of the program by engaging in a course of conduct intended to obstruct and frustrate the office of the commissioner's investigation."

In Chicago, Rodriguez wouldn't deny using PEDs, saying "when the time is right, there will be an opportunity to do all of that. I don't think that time is right now."

He added: "It's been the toughest fight of my life. By any means, am I out of the woods? This is probably just phase two just starting. It's not going to get easier. It's probably going to get harder."

Rodriguez admitted four years ago that he used PEDs while with Texas from 2001-03 but has repeatedly denied using them since. His penalty was more than double the previous high for a PED suspension, a 100-game ban given last year to San Francisco pitcher Guillermo Mota for a second offense.

"At some point we'll sit in front of an arbiter and give our case," Rodriguez said.

Yankees manager Joe Girardi, minutes after losing captain Derek Jeter for the third time this year, was ready to welcome A-Rod back. "I'm not here to judge people. That's not my job," Girardi said. "He's a player as long as he's in our clubhouse."

Girardi called the suspensions "another black eye for us, but we're trying to clean this game up."

The suspensions are thought to be the most at once for off-field conduct since 1921, when Commissioner Kenesaw Mountain Landis banned eight White Sox players for life for throwing the 1919 World Series against Cincinnati: Shoeless Joe Jackson, Eddie Cicotte, Happy Felsch, Chick Gandil, Fred McMullin, Charles "Swede" Risberg, Buck Weaver and Claude "Lefty" Williams. They had been suspended by the team the previous year and were penalized by baseball even though they had been acquitted of criminal charges.

As for the modern-day All-Stars, Cruz, an outfielder, leads Texas in RBIs and Peralta has been a top hitter and shortstop for Detroit, a pair of teams in the midst of pennant races. They will be eligible to return for the postseason.

While the players' association has fought many drug penalties in the past three decades, attitudes of its membership have shifted sharply in recent years and union staff encouraged settlements in the Biogenesis probe.

"The accepted suspensions announced today are consistent with the punishments set forth in the Joint Drug Agreement, and were arrived at only after hours of intense negotiations between the bargaining parties, the players and their representatives," union head Michael Weiner said. "For the player appealing, Alex Rodriguez, we agree with his decision to fight his suspension. We believe that the commissioner has not acted appropriately ... The union, consistent with its history, will defend his rights vigorously."

Fighting a brain tumor diagnosed a year ago, Weiner spoke in a raspy voice during a conference call and said the union's executive board will consider stiffer drug penalties when players meet in December.

But the union will fight Rodriguez's discipline.

"We've never had a 200-plus (game) penalty for a player who may have used drugs," he said. "And among other things, I just think that's way out of line."

A-Rod intimated Friday that New York did not want him to return. The Yankees answered Monday with a statement:

"We are compelled to address certain reckless and false allegations concerning the Yankees' role in this matter," the team said. "The New York Yankees in no way instituted and/or assisted MLB in the direction of this investigation; or used the investigation as an attempt to avoid its responsibilities under a player contract; or did its medical staff fail to provide the appropriate standard of care to Alex Rodriguez."

Rodriguez is making $28 million this year, and his salary drops to $25 million next year and $21 million in 2015. If the 211-game penalty is upheld, his lost pay could range from $30.6 million to $32.7 million, depending on when exactly the suspension is served.

Players have often succeeded at persuading arbitrators to overturn or shorten drug suspensions. In the era before the drug agreement, LaMarr Hoyt, Ferguson Jenkins, Pascual Perez and Willie Wilson were among those who had success in hearings, and Steve Howe's lifetime ban for a seventh suspension related to drugs or alcohol was cut to 119 days.

Weiner said a settlement prior to Horowitz's decision is possible but not likely. David Cornwell, an attorney for one of Rodriguez's three law firms, called the penalty an "unprecedented action."

Rodriguez's suspension might dampen his future chances for election to the Hall of Fame. Barry Bonds, Roger Clemens and Mark McGwire all compiled big numbers, too, but voters blocked them from Cooperstown because of the drug cloud.

Though they lose part of their salaries, the stats and awards are safe for baseball players penalized in drug cases. Nothing is stripped from any record book or trophy case.

Cruz attributed his action to a gastrointestinal infection, helicobacter pylori, and said he had lost 40 pounds following the 2011 season.

"I made an error in judgment that I deeply regret, and I accept full responsibility for that error," he said in a statement. "I should have handled the situation differently, and my illness was no excuse."

Peralta can rejoin Detroit for a season-ending three-game series at Miami _ not far from the former office of Biogenesis.

In a statement released by the Tigers, Peralta said in "spring of 2012, I made a terrible mistake that I deeply regret." Peralta apologized to his teammates and "the great fans in Detroit," saying he knows he let "many good people down."

MLB said Melky Cabrera, Colon and Grandal will not receive additional discipline and it found no violations for Washington pitcher Gio Gonzalez and Baltimore infielder Danny Valencia, both linked to Biogenesis in media reports.

In June, baseball struck a deal for Biogenesis founder Anthony Bosch to cooperate. After holding investigatory interviews with the players, MLB presented evidence to the players' union along with its intended penalties, starting the final round of negotiations.

"Those players who have violated the program have created scrutiny for the vast majority of our players, who play the game the right way," baseball Commissioner Bud Selig said. "We continue to attack this issue on every front _ from science and research, to education and awareness, to fact-finding and investigative skills."

Picked first in the 1993 amateur draft, Rodriguez reached the majors at age 18 with Seattle and was an All-Star by 20. He seemed destined to become one of the greatest players in the history of the game, and appeared in line to break the all-time home run record _ he ranks fifth with 647.

Yet for all his accomplishments, Rodriguez has been reviled by fans as much as celebrated, especially later in his career. His off-field antics, enormous paycheck and playoff failures have often overshadowed his feats at the plate.

The Yankees are now saddled with an aging star slowed by two hip operations. They still owe him around $94 million, raising questions about whether his dwindling production is worth that price.