DINOSAUR NATIONAL MONUMENT — The Bureau of Land Management in Colorado is delaying issuing three parcels of land for possible oil and gas development after environmental groups protested they were too close to the boundary of Dinosaur National Monument.

The three tracks of 5,145 acres were near the Deer Lodge entrance road to the monument in western Colorado and were proposed for an oil and gas lease/sale set for Feb. 14.

Groups that included the National Parks Conservation Association and The Wilderness Society said any drilling on the land would pose unacceptable environmental consequences to the monument, such as air quality problems and impairment of the night skies.

In addition, oil and gas activity is not compatible with a national monument and would interfere with the visitor experience, the groups said.

Vanessa Lacoya, a spokeswoman with the BLM Colorado office, said the protests were reviewed by the federal agency, which decided to defer those tracts for additional analysis.

Part of that review will include conducting inventory on the land for potential wilderness characteristics, she noted. A deferral of the tracts does not mean they will not be offered at a subsequent lease and sale for oil or gas development, she added.

David Nimkin, southwest regional director for the National Parks Conservation Association, said the BLM decision stresses how important it is for the federal agency to conduct a thorough review of parcels prior to any auction. 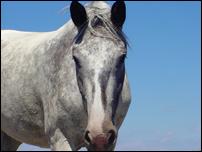 Critics skeptical of US `compassion' for mustangs

he U.S. Bureau of Land Management is issuing new policy directives emphasizing "compassion and concern" for wild horses on federal lands in the West, in response to a growing public outcry over alleged abuse during roundups of thousands of mustangs in recent years.

"We are pleased with the decision," he said. "We believe that there is an important role for the BLM to effectively look at all impacts before they put these parcels for out sale."

He added that the Department of Interior has developed a model for master leasing that involves doing planning prior to leasing.

"It is a plan first, lease later approach," he said. "That is currently in demonstration mode in Moab where all manner of effects is being looked at. I would strongly encourage that the model of master leasing/planning that is being undertaken in Utah in the Moab district have greater applicability in Colorado."