At Grand Canyon, elk go from attraction to problem

FLAGSTAFF, Ariz. (AP) - The Grand Canyon is an international destination where spectacular views are not the only thing that grab tourists' attention.

Elk, once a rare sight at the national park, now regularly jam up the park's roads, graze on hotel lawns and aren't too shy about displaying their power, provoked or not. They've broken bones and caused eye injuries in the most serious circumstances, and give chase to the unsuspecting.

Park officials want to reduce those interactions with humans by depriving the elk of the food and water sources that lured them to the area: grass along the South Rim and the runoff from a water treatment facility.

Signs tell visitors to keep their distance from wildlife and warn that the animals could get aggressive, particularly during breeding season. But getting that message out is challenging with an ever-changing audience. Some 5 million people visit Grand Canyon each year and about 2,000 live there. 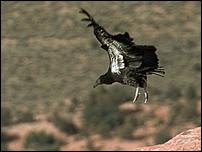 A California condor found dead at Zion National Park is believed to have died from lead poisoning after foraging on a bullet-ridden game carcass, in another setback for the recovery project on the Utah-Arizona border, officials said Monday.

Roads and campsites become clogged with elk and cars, through the animals' stubborn nature or camera-toting tourists marveling at them. A volunteer crew responded to 115 "elk jams" over 53 days last year, taking anywhere from one minute to 2 hours to clear up.

Kim Crumbo was jogging at the Grand Canyon in 2006 when he saw a bull elk rubbing its antlers against a tree. He said he screamed "like a banshee" when it knocked him over, breaking his leg in three places.

"They (elk) really don't belong there," said Crumbo, director of conservation at the Grand Canyon Wildlands Council. "In spite of my encounter, I still think they're beautiful animals, magnificent. The park really needs to deal with that issue not exclusive of public safety but from an ecological standpoint."

The bull elk in the park weigh around 700 pounds, stand 5 feet tall at their shoulders and have impressive sets of antlers. Hunting generally controls elk populations, but that's prohibited at the Grand Canyon, as is feeding wildlife.

Elk brought in by train from Yellowstone National Park helped re-establish the Arizona populations after the state's native elk became extinct around 1900.

They're now too close to the Grand Canyon's most popular areas for comfort. Last summer, a tourist standing too close to an elk was scratched in the eye by its antlers.

The park really needs to deal with that issue not exclusive of public safety but from an ecological standpoint.

Officials say it would be best to replace lawns with native vegetation that's abundant throughout the park, so that the elk don't necessarily prefer the tourist-heavy areas to other spots. They're also considering using excess water from the treatment facility to expand the park's nursery instead of letting elk drink it as it flows over the landscape.

At the local school, students and staff constantly are reminded to shut the gates of the fence around the recreational field to keep elk off the grass and away from children, though the animals have gone under and over the fence.

Grand Canyon residents are told not to put animal feed, water buckets or bird feeders outside so that elk aren't tempted to wander around homes.

More than half of the 91 elk-related calls that the wildlife program has responded to since fall 2008 were over elk and people mingling in the same areas, or approaching one another, said Grand Canyon wildlife biologist Brandon Holton.

Even when visitors follow the guidelines not to approach or feed elk, to flee when they're acting aggressively and to avoid the animals' territory, accidents still happen. In 2011, a park concessionaire employee was gored in the back by an elk while she was on the sidewalk one of the hotels.