SALT LAKE CITY — Many have encountered slick surfaces due to the ice storm on Thursday. Additionally, many have reported slips and falls on the ice, with some being critically injured.

Hospitals have been extremely busy the last few days dealing with injuries from people falling. They say that a lot of people have been taken off guard, and don't realize how slippery it is when they go outside.

"I went out to get the newspaper and the next thing I knew I was flat on my back on the driveway," said emergency room patient, Jeniel Anderson.

Anderson wound up in the ER with a head laceration after slipping on the ice.

Anderson said she was surprised at how slick it was.

"It's very slick," she said. "It's deceivingly so because it doesn't look slick." 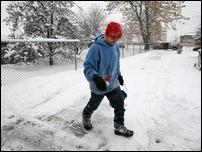 An unusual freezing rain turned driving conditions treacherous and contributed to multi-vehicle crashes along parts of the Wasatch Front Thursday, including several that involved UHP troopers.

She was not the only one that was deceived by the black ice.

"Today by noon we had at least 25 to 30 patients that were slip-and-falls on the ice," said Intermountain Medical Center emergency room nurse, Tammy Hinterman.

Over the last couple of days, hospitals up and down the Wasatch Front treated an overwhelming number of ice-related injuries. According to Hinterman, the injuries range from arm fractures, head lacerations and head injuries.

On Thursday, the Intermountain Medical Center in Murray treated a record number of patients in the ER.

"We saw 327 people with a record number of traumas as well," Hinterman said. "So it was insane. It's terrible and I think if you don't have to go outside to do anything, you shouldn't."

Anderson said she won't be going out to get the paper for awhile.

"It's the last time till spring I think," she said.