What's the deal with this trillion-dollar coin idea?

CNN: Can We Solve The Debt Problem With A Big Ol' One-Trillion Dollar Coin?

SALT LAKE CITY — Wonks and laypeople alike have heard a lot of talk in the last week or so about what sounds like an episode of "The Simpsons": having Treasury Secretary Timothy Geithner mint a trillion-dollar denomination platinum coin in order to buy more time to fix the debt ceiling crisis, thus taking the fire out of the Republicans' current bargaining position.

What's the deal with this seemingly comical but increasingly serious idea? Is the entire nation being trolled in the biggest Internet joke ever? Is it even legal?

Yes, a trillion-dollar platinum coin appears to be legal and legitimate

Specifically, "The Simpsons" episode you're bound to be making plenty of references to in your head is Season 9 Episode 20, entitled "The Trouble With Trillions." A trillion-dollar bill was stolen by Mr. Burns. Homer gets involved. Great hilarity ensues.

But more relevantly, there is a little-known law that allows the treasury secretary to mint a platinum — and only platinum — coin in any size, shape or denomination he sees fit, at his sole discretion. It's 31 USC § 5112 (k):

"The Secretary may mint and issue platinum bullion coins and proof platinum coins in accordance with such specifications, designs, varieties, quantities, denominations and inscriptions as the Secretary, in the Secretary's discretion, may prescribe from time to time."

A Harvard law professor told the Wall Street Journal that the idea appears to be legally sound and would actually be difficult to challenge in court.

A former head of the U.S. Mint, who in fact helped to draft the law, agrees.

"Any court challenge is likely to be quickly dismissed since (1) authority to mint the coin is firmly rooted in law that itself is grounded in the expressed constitutional powers of Congress, (2) Treasury has routinely exercised this authority since the birth of the republic, and (3) the accounting treatment of the coin is entirely routine," said Phillip Diehl, writing on the comments section of the blog Pragmatic Capitalism, which floated the idea in the summer of 2011.

How would a trillion-dollar coin solve the debt crisis?

Well, it wouldn't exactly solve it, but it would buy some time. And for the most part, the idea isn't supposed to be taken seriously. It's mostly intended to make it really obvious how strange the current debt ceiling crisis is in the first place, like Johnathan Swift's famous essay, "A Modest Proposal," where he satirically suggested Irish children should be sold as food to the English to highlight the careless and heartless attitude toward poverty-stricken Ireland.

The basic problem is this: The United States owes a lot of people a lot of money, including the American people themselves through programs like Medicaid, Medicare and Social Security, not to mention all the other things government pays for. But the government doesn't have that much money. In order to actually get people the money and services they are owed, the country has to take out loans. Big ones. 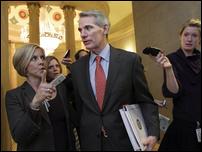 Sure the rich may have to pay more in taxes. But a "fiscal cliff" budget deal could mean pain for nearly everyone else, too: higher airline ticket prices, for example, an end to Saturday mail delivery, fewer food stamps and lower farm subsidies.

Congress caps the amount of loans we can take out in a given year, but also generally raises that cap each year. This year, raising that cap has become politically difficult for a number of reasons, not the least of which is a deeply divided Congress. Technically speaking, we already reached and surpassed the debt limit on Dec. 31, but the problem doesn't really become critical until February.

But another way to get the money would basically be to make more of it. Usually the Treasury can't just print anything it wants in order to pay off debts, and lots of work and politics goes into the money supply. But the trillion-dollar coin idea is a loophole in the process which had not been noticed or exploited until a few folks proposed the idea — mostly as a joke — about a year ago.

The coin would instantly be put in the Federal Reserve, creating a trillion dollars that could then be used for any purpose. After the debt ceiling is officially raised, as it probably will be eventually, the government can take out more debt and then melt the coin. In the long term, the trillion dollars would not actually affect the U.S. money supply since it all would eventually — and literally — melt away. That's the idea anyway.

Is anyone taking the idea seriously?

It depends, of course, on who you ask.

The idea has been widely panned as ridiculous and gimmicky both in the blogosphere and in the real world of politicians and lawmakers. Again, it was originally intended as joke to highlight the idea held by many economic pundits that the debt ceiling is itself crazy. But that hasn't stopped people from really suggesting it.

"It's easy to make sententious remarks to the effect that we shouldn't look for gimmicks, we should sit down like serious people and deal with our problems realistically," Krugman wrote Monday.

"That may sound reasonable," he continued, "if you've been living in a cave for the past four years. Given the realities of our political situation, and in particular the mixture of ruthlessness and craziness that now characterizes House Republicans, it's just ridiculous — far more ridiculous than the notion of the coin."

THE RESET: Treasury secretary may be next job up

Rep. Jerrold Nadler, D-New York, said that he was totally serious in pushing for the minting of the coin last week.

There is even a petition asking for the coin to be minted on the White House website that, as of this writing, has 6,600 signatures. If it gets to 25,000 before Feb. 2, the White House would be required to offer an official statement on the petition.

The idea is serious enough to have caused one congressman to propose a bill to close the loophole entirely. Rep. Greg Walden, R-Oregon, intends to introduce the bill to the House soon.

"Some people are in denial about the need to reduce spending and balance the budget," Walden said in a statement. "This scheme to mint trillion-dollar platinum coins is absurd and dangerous, and would be laughable if the proponents weren't so serious about it as a solution."

What would the effects be, positive or negative, if it actually happened?

Depending on who you ask, the effects would be only positive, allowing for more time to figure out the debt ceiling crisis while not affecting money supply any more than raising the debt ceiling would have to begin with.

"This works just like additional tax revenue or borrowing under a higher debt limit," Diehl said. "In fact, when the debt limit is raised, Treasury would sell more bonds, the $1 trillion would be taken off the books, and the coin would be melted."

Others, of course, disagree. Felix Salmon, opinion writer for Reuters, has said the idea would be quite destructive, amounting to a vote of no confidence in the three-branch system of government.

President Barack Obama is hailing a last-minute deal that pulled the country back from the "fiscal cliff," but warned that he "will not compromise" over his insistence that Congress lift the federal debt ceiling.

Responding to Krugman's comments in the New York Times, he said that "it's (Congress') right to behave like a bunch of utter morons. If the executive branch failed to respect that right, it would effectively be defying the exact same authority by which the president himself governs. The result would be a governance crisis, which would make the last debt ceiling fiasco look positively benign in comparison."

Nevertheless, Salmon argues that they need to keep the idea in their pocked, saying, "If you have a bazooka in your pocket and people know it, you probably won't have to use it."

That may be why the White House has offered no actual statement on the idea so far. While the blogosphere and the pundits write more about it each day, the West Wing has been entirely silent on the matter.