2 months after being convicted, woman using drugs during pregnancy surrenders

PARK CITY — A woman convicted of taking drugs while pregnant, later giving birth to a drug-addicted baby, turned herself in to authorities Tuesday, two months after failing to show up for sentencing.

Villa gave birth at Park City Medical Center to a boy on Dec. 14, 2011. Afterward, she tested positive for cocaine, opiates, marijuana and benzodiazepines or anti-anxiety medication, according to charging documents.

Her son was born underweight at 4 pounds, court documents state. He also tested positive for opiates, marijuana and benzodiazepines, and suffered from respiratory distress, "significant meconium aspiration," and "bilateral pneumothoreces," the charges state.

The infant was immediately flown to Primary Children's Medical Center. Investigators said he was in the intensive care unit for six weeks and was given morphine for his drug withdrawal symptoms. 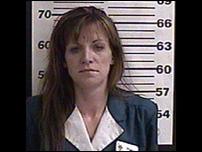 Criminal charges have been filed against a woman with a history of drug addiction who police say gave birth to a drug-addicted baby.

Doctors noted that the child could suffer "long-term complications" and may have "developmental issues," according to the charges. The child was placed in a foster home.

Villa told social workers she "was a heroin addict and claimed she tried to quit using drugs while she was pregnant but was unable to do so," the charges state.

Shortly after giving birth, Villa left the Park City hospital and was believed to have left the state. Charges were filed against her in June. She pleaded guilty in August. But on the day of her scheduled sentencing in October, she failed to show up for court and a warrant was issued for her arrest. Salt Lake police said she surrendered Tuesday night.

Villa's case is similar to charges filed in another Summit County case in November.

Shea Renee Sheeran, 27, was charged with child abuse involving intentionally inflicting serious physical injury and child endangerment, second-degree felonies. Sheeran gave birth to a boy in August. Toxicology tests conducted on both mother and child after the birth showed Sheeran tested positive for methamphetamine, cocaine, amphetamines and opiates, and her son tested positive for amphetamines and opiates, according to charging documents.