SALT LAKE CITY — We continue to follow the remarkable "run" of South Jordon's Sam Gordon. More than 4 million views of this 9-year-old's incredible football highlights on YouTube has turned the fourth grader at Daybreak Elementary School in South Jordan into a Utah phenomenon and national treasure.

This weekend alone, Sam (short for Samantha), jet-setted over then up the west coast. Sunday morning brought this little girl, who runs around and through the boys in the Gremlin youth league in the Salt Lake Valley, in with the big boys. NFL Network flew her out for an early Sunday morning appearance and demonstration (hilarious as she blows by Warren Sapp).

I tweeted a question to her @footballsam6, wondering if she was nervous going on the NFL Network on a huge NFL Sunday? She tweeted me back @tksportsbeat, saying, "I was nervous before but not during. I liked when they showed my tackles."

It'll get better too. Tonight the little girl her football coach calls "Sweet Feet" will be the special guest of the Niners at the Monday Night Football game against the Chicago Bears. Sam is going to get the chance to meet (she loves BYU Football and Soccer) Cougar legend Steve Young. The NFL and 49ers Hall of Famer will be there as part of ESPN's Monday Night Football coverage.

I was nervous before but not during. I liked when they showed my tackles.

WAC Champion Utah State's football coach Gary Andersen joined me on SportsBeat Sunday last night and he'd already heard all about Sam, you see him gush about her in the above video.

Stay right here for the latest on Sam Gordon's "once in a lifetime" tour of the nation. Tuesday, she flies to New York City for more national TV appearances. If you're thinking "when does this girl get around to school work?" Her Daybreak Elementary is on a year-round schedule and just happens to be on break as she hop-scotches from big city to bigger city!

Taylor Swift, One Direction, Justin Bieber — Yeah, they're all used to this globe-trotting, jet-setting, chauffeured-around-in-big-cities-in-Limos-lifestyle. But for little Sam Gordon, 4th Grader at Daybreak Elementary School in South Jordon, her 15 minutes of fame will blow past 15 days. She's already appeared on "Good Morning America." "Fox and Friends" and "Inside Edition".

It's got to be right up her 35 scores: Running for 3,000 yards this season in the Salt Lake Valley's Gremlin Football League.

Just for kicks, Sam Gordon's dad put her highlights up on YouTube recently and it blew up. Like nearly 5 million views in three days.

Daybreak Elementary, a year-round school, has an extended break that is perfectly timed with this mind-boggling phenomenon. As I run through Sam's suddenly jammed social calendar, keep in mind this 4th grade precocious prodigy is not missing any school!

Piling up "pinball machine" numbers on the field, add in her darling smile, plus perfect blend of "aw-shucks" and "Yea, this is me!" attitude has caught the nation's attention and literally given Sam a national profile.

So what's Samantha up to? Oh, just becoming a household name! Recognized (already!) as a celeb at Salt Lake Airport, Sam was asked to sign their "Wall of Fame" right under legendary coach Ron McBride's name.

Then she Jetted to Chicago to do "Fox and Friends and other soon-to-be publicized TV appearances.

Course a girl's got to eat! Sam loved "Chicago-style" hotdogs.

She flew back Friday, chilled like a normal 9-year-old: Video games, kickin' it with friends and really kicking it with her soccer team right up to this afternoon before hopping over to LA.

Brent told me, "I was speechless, thought it was a joke except for the NY area code. We talked for about 10 minutes. He said he was really impressed with the video of Sam."

Tomorrow morning at about 8:45 a.m. Sam will talk runner's vision, great blocking, huge rushing yards and many, many touchdowns with Rich and the guys on the NFL Network.

If you miss it, we'll have the best of that interview for you on SportsBeat Sunday on KSL 5 at 10:35 p.m. 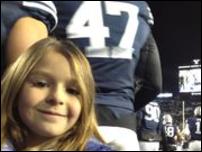 Football's newest phenom is a 9-year-old girl from Utah

World, meet Sam Gordon, a 9-year-old girl from Herriman. Most girls her age are likely content playing with Barbies or having pretend tea parties with their friends. However, Sam plays tackle football, and is extremely good.

NFL Network was at BYU's game last week filming Samantha hangin' with Cougar players on the field pregame. That'll be used as part of the feature on her.

Right after, the NFL Network Sam's back in a limo to LAX up the coast to San Francisco and over to the 49ers walk-through before Monday night's game with the Bears. Niners have been incredibly kind and she's hoping to meet Steve Young at some point during ESPN's day-long coverage leading up to the Niners/Bears game on Monday Night Football.

Then Samantha can surely get home and chill, right? Not yet.

Tuesday bright and early, she's back in a limo and jetting West Coast to East Coast. Gotham. The Big Apple. New York City for yet another major TV appearance.

Just down the road more huge road trips and photo ops. Like meeting her idols on the USA Women's National Soccer team.

Stay tuned, KSL/SportsBeat will be right alongside Sam Gordon for that big run too.