Schools were instructed to place "In Our Mothers' House" behind library counters and require a parental permission slip before checking it out to students after a group of 25 parents petitioned the district for a review of the book.

The Deseret News obtained a copy of the petition, in which parents wrote they objected to the book's message that normalizes a homosexual lifestyle and that the subject matter was too sensitive for young children.

"I believe it glamorizes and normalizes something that is a sensitive issue," one petitioner wrote about the book. "This is propaganda because it puts forth an idea, then makes it look attractive and normal. It portrays that if you don't embrace it, then you have a hole in your heart."

The lawsuit was filed on behalf of Tina Weber, a mother whose children attend one of the schools where the book was removed from shelves.

"I was shocked when I heard that a handful of parents had made a decision about whether everyone else's kids could have access to this book," Weber said in a statement released by the ACLU. "Our job as parents is to make sure we teach our children about our values. We can do that without imposing our personal views on the rest of the school community." 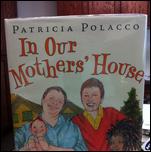 Community members met Monday at the Pleasant Valley Branch for a panel on same-gender families and to discuss whether it's right to pull a book that deals with an alternative family structure from school library bookshelves.

John Mejia, legal director for the ACLU of Utah, said the lawsuit is primarily in response to what the ACLU sees as a violation of the students' First Amendment rights.

Mejia said schools cannot limit a student's access to information simply because some people disagree with a book's viewpoint. Removing the book from shelves, he said, sends the message to students that there is something wrong with their peers who have same-sex parents.

Mejia also said the ACLU objects to the district's stance that leaving the book on shelves would run afoul of state law that prohibits advocacy of or instruction on homosexuality.

"The state law, we feel, is being used as reasoning to violate the First Amendment," he said. "We want the court to declare that that law does not apply."

Davis School District spokesman Chris Williams said the law against advocacy was a component of the district library committee's review of "In Our Mothers' House," which was conducted in accordance with established policy.

"We still feel comfortable with the process we followed," he said.

Williams said the district had not yet been officially served with the lawsuit Tuesday. He said district officials met with representatives from the ACLU and other groups in the spring, following the decision to remove the book.

"We thought those meetings were cordial," Williams said.

The controversy began in January, when the mother of a kindergarten student who brought "In Our Mothers' House" home objected to its subject matter. Based on her objections, a school review committee determined the book should be moved to the third- to sixth-grade section of the library.

Unsatisfied with that decision, the mother, along with 24 other parents, presented a petition to the district calling for an official review of book.

"In Our Mothers' House," written and illustrated by Patricia Polacco, was published by Philomel in 2009.

According to the Utah Pride Center, Polacco was inspired to write the book after attending an elementary school assembly where a young girl with same-sex parents was stopped from reading an essay about her family and told, "You don't come from a real family."

"Utah is home to thousands of lesbian, gay, bisexual and transgender adults, many of whom are proud parents raising children in our communities," said Valerie Larabee, Utah Pride Center executive director. "Relegating this book to the shelves behind the librarian's desk stigmatizes the book and every child that wants to read it."

The lawsuit calls for all copies of the book to be returned to library shelves and made accessible to students under the same criteria of any book at comparable reading levels.

The lawsuit also seeks a permanent injunction prohibiting Davis School District from removing similar books in the future and a declaratory judgement that the district may not rely on the state's sexual education law to restrict access to library materials.